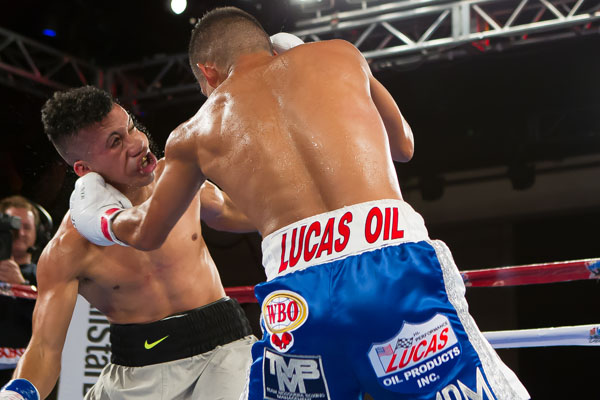 With the main event for the 2017 season premiere of Boxeo Telemundo already set, series handlers have also released the full schedule of dates for the upcoming spring season.

The series will begin February 24, airing live from the Tony Rosa Convention Center in Palm Bay, Florida. Headlining the show, super flyweight contender Ricardo Rodriguez – a regular on the Telemundo circuit – is given perhaps his toughest career test as he faces unbeaten Carlos Narvaez (16-0, 6KOs), a rising prospect from Manati, Puerto Rico.

The super flyweight crossroads bout is scheduled for 10 rounds with a regional title at stake.

Separating this season premiere from past installments is what comes with the televised undercard. A pair of Rio 2016 Olympians will be featured, with Telemundo viewers getting their first glimpse at Teofimo Lopez and Kimmissee's Antonio Vargas, the latter whom will enjoy his pro debut relatively close to his home region.

"I'm over the moon with the card we have in store for Febraury 24," promoter Felix 'Tutico' Zabala Jr. told FightNights.com. "In addition to our strong main event, we get to present a pair of top former amateurs at the ground level of their pro career. Our ratings have consistently improved through the years, so with more eyes than ever on our shows it's important to raise our own standards to ensure that we give more than the basic expectations of our viewers."

A familiar face to the Telemundo circuit, Rodriguez (15-3. 4KOs) – a 27-year old Mexico City native based out of Los Angeles – makes his ninth consecutive network appearance, including his fourth straight in Central Florida and three of his last four starts coming at this very venue. His lone two losses among his past 15 bouts have both come at the hands of title challenger David Carmona.

This particular occasion marks the second straight year he serves in the annual season premiere, having claimed a decisive 10-round points win over Miguel Cartagena in last year’s headliner exactly 52 weeks ago from the upcoming fight night.

Rodriguez followed up the feat with similarly dominant decision victories over David Quijano in June and October.

Narvaez makes his first appearance on Telemundo and just his second overall in the lower 48 states. The 27-year old protégé of former four-division world champion Miguel Cotto has fought primarily in his native Puerto Rico, along with the occasional trip to Dominican Republic.

His lone stateside appearance came in Oct. ’14, scoring a six-round win at the Alamodome in San Antonio. The most win for Narvaez came last August, edging out Juan Carlos Herrera over eight rounds in Catano, Puerto Rico.

An opponent is still being sought for Lopez – a super featherweight from Queens, New York who represented Honduras through dual citizenship – made his pro debut on the undercard of Manny Pacquiao’s “return” in his title-regaining effort over Jesse Vargas last November in Las Vegas.

Hours before that moment, Lopez claimed a 2nd round knockout victory over Ishwar Siqueuiros. It was a much better feeling than the manner in which he exited the Rio Olympics, landing on the business end of a highly questionable decision in favor of France’s Sofiane Oumiha in the opening round of lightweight competition.

Vargas -who also waits confirmation of a dance partner - enjoyed slightly more Olympic success, winning his opening round bout in the bantamweight division before succumbing to eventual Gold medal winner Shakhobidin Zoirov of Uzbekistan. The 20-year old from Ocala, Florida waited a few months, fielding several offers before inking with Top Rank, a move that made sense given the company recently setting up camp in the Sunshine State for its renewed Unimas series, in addition to the occasional appearance on Telemundo shows promoted by Zabala’s All-Star Boxing outfit.

The spring series will run on four consecutive Fridays from February 24 through March 17. The latter date will take place at A La Carte Pavilion in Tampa, Florida. Sandwiched in between, the March 3 and March 10 shows will both come from the fresh, new backdrop at Carpa Astros in Mexico City, Mexico.

Main events and undercard attractions for the balance of the spring series is expected to roll out in the coming weeks.