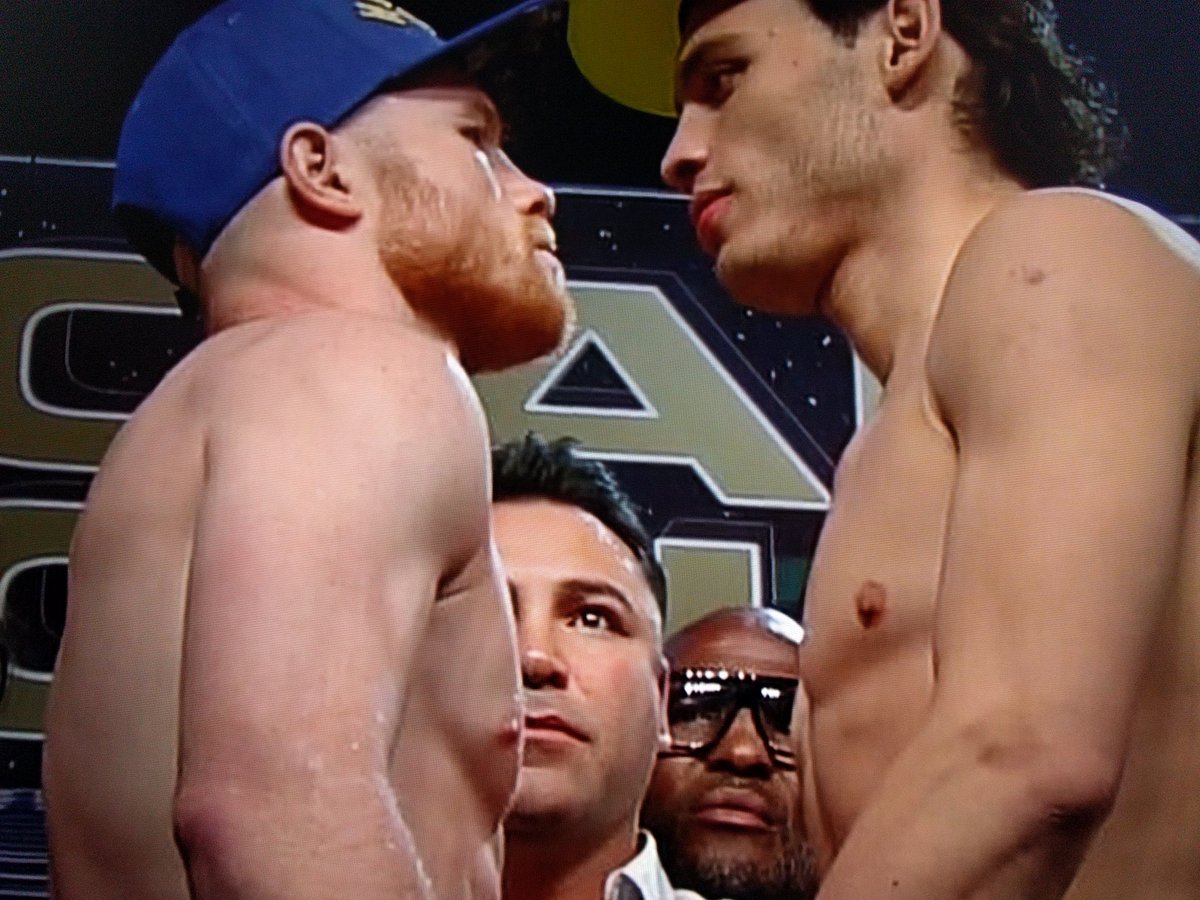 The scheduled 12-round bout will be contested at a maximum limit of 164.5 pounds, headlining a four-fight Pay-Per-View event live in front of a sold-out crowd at T-Mobile Arena in Las Vegas. Both boxers came in slightly under, each weighing 164 lbs.

Given the scattered history of Chavez Jr. at the scales, the fact that he not only made weight but came in just under prompted a collective sigh of relief from the boxing community.

Alvarez comes in riding a six-fight win streak following the lone loss of his career, having dropped a 12-round decision to Floyd Mayweather Jr. in their Sept. '14 superfight. Included among the current run is title wins at middleweight (lineal) and a second-reign at super welterweight (alphabet), although none of those prizes are at stake for this event.

The middleweight championship winning effort over Miguel Cotto in Nov. '15 forever secured Alvarez a place in history as the first ever from Mexico to capture the World (lineal) championship at that weight. He made one defense - a 6th round knockout of Amir Khan on this very weekend one year ago atop the first-ever boxing event at T-Mobile Arena - followed by his becoming a three-time titlist at super welterweight with a 9th round stoppage of Liam Smith last September in Arlington, Texas.

Chavez Jr. was Mexico's first ever middleweight titlist, picking up a vacant alphabet belt in a June '11 points win over Sebastian Zbik. He made three successful defenses before conceding the crown to then-lineal champ Sergio Martinez in Sept. '12, although he nearly erased an 11-round deficit on the scorecards with a 12th round knockdown but was unable to close the show.

He has since won four of his past five contests, but all five taking place above the super middleweight limit. The lone loss in that stretch came in a humbling 9th round stoppage at the hands of Andrzej Fonfara in April '15. Two wins have followed, including a 10-round decision over Dominik Britsch last December.

The 164 pounds at which he checked in marks his lightest weight since coming in at 158 lbs. for his aforementioned loss to Martinez.

In the chief support, David Lemieux (37-3, 33KOs) returns after just a two-month turnaround, as he takes on Mexico's Marcos Reyes (35-4, 26KOs) in a 10-round above-the-limit middleweight contest. Lemieux, a former middleweight titlist from Canada, came in at 163 lbs. - a sigh of relief as his weight a concern coming in considering his past history.

Ironically, it was his opponent Reyes who had to sweat it out at the scales. The journeyman was 163.5 lbs. on his first try, but made it down to the contracted limit after stripping down to his birthday suit.

There are theories abound that - with wins by both - Lemieux can wind up as the September opponent of choice for Alvarez in the event that the Mexican superstar doesn't wind up fighting unbeaten, unified middleweight titlist Gennady Golovkin. For now, it remains a conspiracy as all signs point to Golovkin-Alvarez becoming a reality assuming all goes well on Saturday.

- Lucas Matthysse (37-4, 34KOs) returns for the first time since a humbling knockout loss to Viktor Postol in their Oct. '15 super welterweight title fight. He moves up in weight to take on veteran trialhorse Emanuel Taylor (20-4, 14KOs). Both boxers weighed in at 147 lbs. for their scheduled 10-round bout.