Cotto At Lightest Weight Since 2009 For Farewell Fight 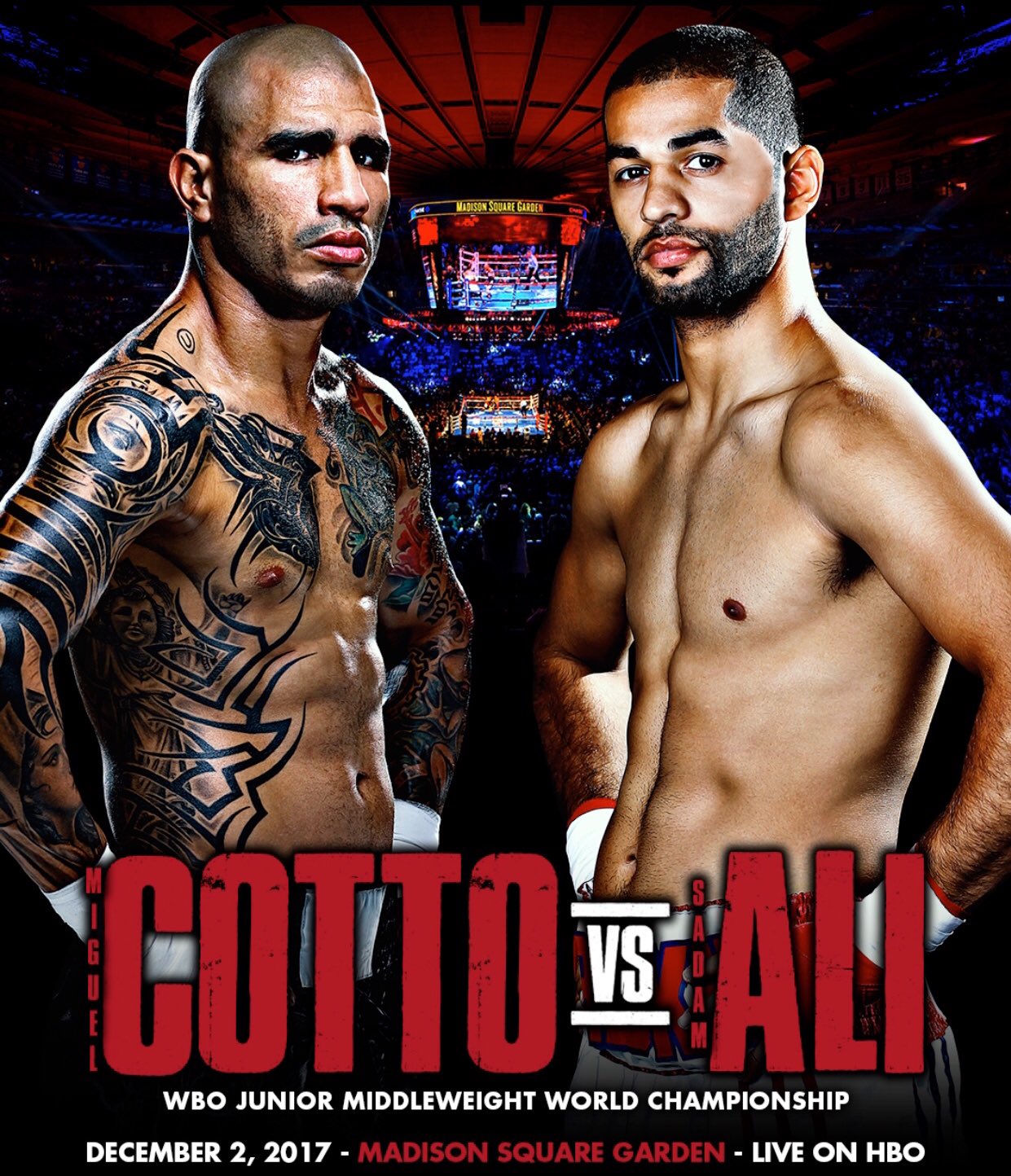 This time around will simply be the last time he steps foot in the building—or any other—as a prizefighter.

A major titlists in four separate weight classes, the 17-year pro from Caguas, Puerto Rico was an exceedingly light 151.6 lbs. for the final fight of his career as he faces Brooklyn's Sadam Ali (153 lbs.) this weekend. Their 12-round super welterweight title fight will air live on HBO from Madison Square Garden in New York City, marking his 10th headlining appearance at the venue in which he's sold more tickets than any other boxer in the 21st century.

Cotto (41-5, 33KOs) made history for his boxing rich Puerto Rico in his last Garden party, tearing through Sergio Martinez in nine viciously one-sided rounds to wrest the middleweight crown. In doing so, he became the first-ever boxer from P.R. to win titles in four separate weight classes (since surpassed by Amanda Serrano, now a five-time titlist) and still the only male Boricua boxer to ever accomplish the feat.

For the bout, Cotto tipped the scales at a light but shredded 155 lbs., the heaviest of career yet five pounds below the middleweight mark and even four pounds under the agreed-upon 159-pound catchweight in place. He's weighed 153.5 lbs. for his three bouts since then—two of which were for the World middleweight championship, including his 12-round title conceding effort to Saul 'Canelo' Alvarez—including his last start where he shut out Yoshihiro Kamegai this past August to reclaim a piece of the super welterweight crown.

The 37-year old future Hall of Famer has also enjoyed title reigns at super lightweight and welterweight. The latter ended in a 12th round stoppage to Manny Pacquiao, a Nov. '09 superfight for which he weighed 145 pounds. He's weighed 152 lbs. or above for every bout since then prior to this weekend's clash.

All told. Cotto is 8-1 at Madison Square Garden. His lone loss at the venue came on this very weekend five years ago, dropping a 12-round decision to Austin Trout for his second defeat in as many fights in a 2012 campaign that also included a points loss to Floyd Mayweather that prior May. The clash with Trout marked a rare occasion where Cotto didn't pack out Madison Square Garden, although the same dilemma hovers over this weekend's affair. Both the Trout fight and this weekend's event featured Golden Boy Promotions as the lead promoter.

Golden Boy also promotes Ali (25-1, 14KOs), a member of the 2008 U.S. Olympic boxing team who is still looking to hit his stride in the pro ranks. The 29-year old from the Canarsie section of Brooklyn spent most of the first six years of his career as his own promoter, working a grassroots campaign while developing his skills in the pro ranks.

It was then decided that a major promoter was needed to take his career to the next level, at which point he joined the Golden Boy family beginning with a Nov. '14 win on the undercard of Bernard Hopkins' light heavyweight title loss to Sergey Kovalev. Ali opened that HBO telecast with a rousing 9th round knockout of Luis Carlos Abregu in their weiterweight bout, a weight at which the bulk of his nearly nine-year career has taken place.

From that point to present day, Ali is 5-1 with the lone loss coming in a 9th round stoppage at the hands of Jessie Vargas in their vacant welterweight title fight last March. Three straight wins have followed as he heads into this weekend's contest which marks his first in the super welterweight division.

Opening the HBO telecast, Mexico's Rey Vargas attempts the second defense of his super bantamweight title versus Oscar Negrete, an unbeaten challenger from California by way of Colombia.

Vargas (30-0, 22KOs) weighed 121.4 pounds for his second straight HBO appearance, with his network debut coming on the undercard of Cotto's aforementioned win over Yamegai this past August. The 27-year old from Otumba, Mexico has enjoyed a breakout campaign in 2017, converting his first career fight in the United Kingdom into a title win with a dominant yet strangely scored 12-round decision over local favorite Gavin McDonnell this past February. The win was followed by his first HBO-televised fight, a 12-round nod over Ronny Rios in August, and now his first career bout at Madison Square Garden.

Negrete (17-0, 7KOs) weighed 121.2 pounds in what marks his first bid at a major title. In doing so, he also appears on HBO's airwaves for the first time in his four-plus year career, entering on the heels of an impressive 8th round stoppage of Sergio Frias this past June.