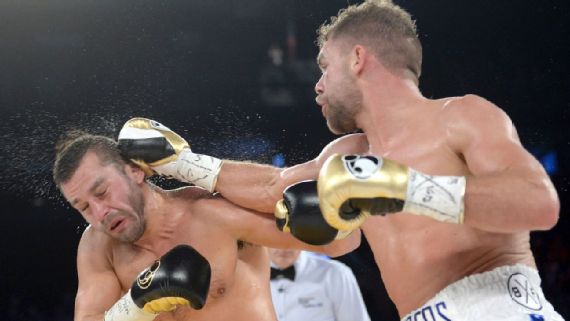 Billy Joe Saunders fought outside of his native United Kingdom for the first time in his career Saturday and put on a boxing clinic.

He retained his WBO middleweight world title with a unanimous decision over David Lemieux at Place Bell in Laval, Quebec.

Saunders (26-0, 12 KO's), 28, put on a dazzling performance, leaving Lemieux, one of boxing's most devastating punchers, lost, confused, and delusional.

"I wasn't at my best. Hats off to Billy Joe," Lemieux said. "As of the second round, my left hand, I couldn't use it the way I wanted to, and he was on the run, so I had difficulties throwing my jab. He was running away from the first round until the end. I guess that's his strategy to win, to run away from fighters who are fighting. If that's the way you want to win, congratulations."

It is simply ludicrous. Lemieux lost every round and got whipped. Saunders dictated the pace with an excellent jab and outlanded Lemieux 103 to 12 in that category.

Saunders, who was in his second fight with trainer Dominic Ingle, credited his coach for keeping him composed and sticking to the game plan throughout the bout.

With the victory, Saunders has plenty of opportunities ahead of him, and they are all significant.

"Golovkin, you keep saying you want my WBO belt," said Saunders, who has the only major belt he needs to become the undisputed champion. "Fight me now. You'll be punching fresh air."