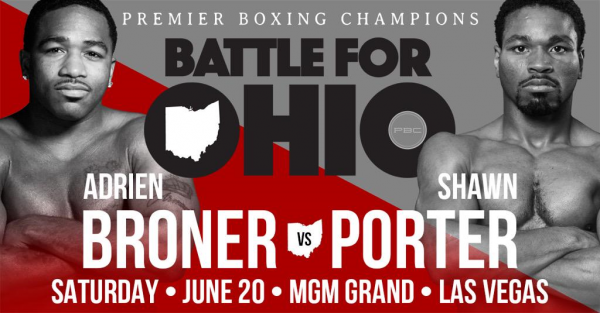 "It's time for AB on NBC and I can't wait for the opportunity," said Broner. "This is a great fight that the fans wanted and I wanted. I'm going to come prepared and I'm going to put on a show. I've never lost at MGM Grand and I don't plan on starting now. Porter is a strong guy but he's never been in the ring with someone like me."

"I feel like this fight is what the PBC is all about - bringing big fights to network TV and this is one of the biggest so far," said Porter. "I am excited to be the headliner against Adrien Broner. I'm always ready for a fight and facing Adrien is definitely going to be a challenge, but I've watched his career, even in the amateurs and I know he can be beat. I'm also looking forward to fighting at the MGM Grand Garden Arena. We moved to Las Vegas for opportunities like this and I would love to make MGM Grand my home."

"I'm excited to have the chance to fight Roberto Garcia," said Spence Jr. "He is a great fighter and I'm happy to have an opportunity to fight on this huge card. It is definitely the biggest opportunity of my career so far and I won't disappoint."

"I can't wait to get back in the ring and showcase my skills on the biggest stage," said Garcia. "Spence Jr. is a strong up and coming fighter but I have experience on my side and I'm going to show it on June 20th."

One of boxing's biggest stars, Broner, the 25-year old phenom who has collected world titles at 130, 135 and 147 pounds, is looking to add another win to his impressive resume. The Cincinnati-born star scored a dominant victory over John Molina Jr. on March 7 at MGM Grand and will look to return to the same big stage and take down his fellow Ohio-native Porter. Broner has prevailed over the likes of Paulie Malignaggi, Daniel Ponce de Leon and Antonio Demarco on the way to becoming a three-division champion.

An athletic marvel, the 27-year-old Porter is eager to keep his momentum going after scoring a fifth-round knockout over Erick Bone on the inaugural March 13 PBC on Spike fight. The Akron-native dominated Devon Alexander in December 2013 to win his previously held world title. He followed that up by overpowering former two-division champion Paulie Malignaggi with a fourth round stoppage in April 2014.

A 2012 U.S. Olympian who had a highly decorated amateur career, the 25-year-old Spence Jr. will look to remain undefeated when he steps into the ring for the biggest challenge of his career. The Desoto, Texas born fighter was dominant in his PBC debut on April 11 as he defeated Samuel Vargas by fifth-round knockout.

A veteran of the sport for nearly 15 years, the 35-year-old Garcia has racked up nine straight victories and will look to extend that streak to 10 when he faces Spence Jr. on June 20. The Weslaco, Texas native has most recently put together wins over Victor Manuel Cayo, Breidis Prescott and a unanimous decision victory over James Stevenson on the April 24 PBC card.