Alvarez and Smith go Head to Head for the First Time 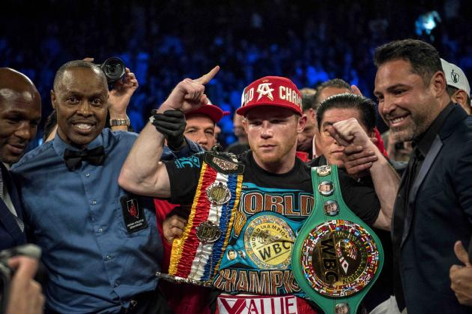 September 15th sees Canelo Alvarez and Liam Smith face off at the AT&T Stadium in Arlington, Texas and the two fighters came face to face for the first time on Monday 18th July. Smith makes his third defence of the WBO World Super-Welterweight title against the Mexican in his American debut.

Alvarez represents a major step up for Smith but the Liverpudlian didn’t hesitate when the fight was offered and accepted virtually immediately. He said of the fight: “I’m very excited, I have asked for a top name for a very long time”. He went on to say when Canelo’s name was suggested he automatically said yes.

Smith intends to win and claims to be very prepared for the fight despite going against him. Alvarez’ record as a two-weight world champion shows that he has the ability to step up against tough opposition himself.

Alvarez turned 26 on the 18th July and is moving back to 154lbs where he held the WBC and WBA titles previously. He also went on to win the WBC Middleweight title despite only being 155lbs, a catch weight for the contest. He is a sporting icon in Mexico and has, by proxy, developed a large following in Texas – the host state for the fight.

Alvarez spoke to the press after the head to head and had this to say: “I’m going to take this fight seriously and prepare like always. I know how I’m going to have to train”. His statements suggest he will be treating the fight as though it is any other and he seemed confident of victory over Smith in September.

His promoter, Oscar De La Hoya, talked up the fight as a clash of two fighters who are both very heavy handed when they land blows. He was also quick to point out both boxers come from fighting families with both combatants having professional fighting brothers.

It is safe to say, neither fighter is looking to lose the upcoming fight but the added pressure of defending a title could weigh heavy on Smith who may well have taken down his last eight opponents before the final bell has been rung but Alvarez improves with every fight showing some very impressive talent.

A very difficult call to make but Smith’s tenacity combined with his previous record suggest he stands a very good chance of victory and 6/1 offers a good return. Backing Alvarez will require a hefty stake for minimal returns and probably isn’t worth compromising the enjoyment of the fight over.