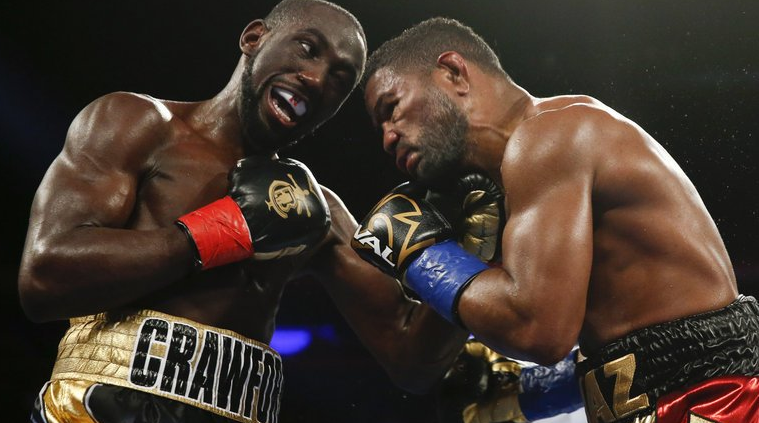 Terence Crawford has been eyeing a bout against Manny Pacquiao for the last year or so. He was not going to let Felix Diaz get in the way of those plans.

Crawford systematically broke Diaz down over 10 rounds, eventually getting the stoppage win before an announced crowd of 8,026 at Madison Square Garden in New York City.

Crawford successfully defended his WBC and WBO world title belts and improves to 31-0, with 22 knockouts. Diaz falls to 19-2, with 9 KOs.

After scoring three dominant victories in 2016, Crawford has looked at unifying the world title belts at 140 pounds or moving up in weight. In the meantime, he faced Diaz, who's most notable victories were against Sammy Vasquez and Adrian Granados.

Many boxing scribes believed Diaz did enough to defeat Lamont Peterson in October of 2015, although he lost a close 12 round majority decision.

The southpaw Diaz did well in spots early on against Crawford, landing an occasional overhand left or counter right to the head of Crawford. The momentum shifted to Crawford by the third round, where the Omaha, Nebraska native displayed pinpoint accuracy, ripping combinations to the face of Diaz.

As the bout progressed, the area around Diaz's eyes began to swell from the amount of punches Crawford threw and landed.

Diaz came on in round seven, where it looked as though he stunned Crawford with a left cross to the head. Diaz followed up, but was not able to follow through with anything of substance.

From the eighth round on, Crawford was more aggressive, putting Diaz on the defensive as he let his hands go with three-four punch combinations to the head.

Crawford, who normally switches from conventional to southpaw and vice versa during fights throughout his career, only fought from a southpaw stance during the Diaz fight.

"I wanted to beat him at his own game," said Crawford, who is promoted by Top Rank.

Asked about his future plans, Crawford again clamored for a Pacquiao fight.

"That's the fight I want," said Crawford. "I would like Indongo (to unify the titles). I want to fight Keith Thurman. I know I can beat them."

In the co-feature, Ray Beltran scored a sensational one-punch knockout win over Jonathan Maicelo in round two of their world title elimination bout.

The clash was a crossroads bout between former lightweight world title challengers who rebuilt their careers in recent years. Beltran had won his previous three fights since his loss to Terence Crawford, while Maicelo recently defeated contender Jose Felix in Feb. 17.

Both fighters were on the attack from the opening bell. Midway through the first round, Beltran went down to the canvas due to a clash of heads, but referee David Fields incorrectly ruled it a knockdown. There was a stoppage in the action as both fighters were cut by the clash of heads; Beltran over his left eye, while Maicelo was cut along his hairline.

Maicelo pressed the action, backing Beltran up against the ropes where he ripped combinations to the head and body. But Beltran was undeterred, remaining patient and looking to counter.

He did so about midway through the second round, as he unleashed a count left hook that dropped Maicelo flat onto his back. Maicelo's head bounced multiple times on the canvas from the impact of the punch, promoting referee David Fields to immediately stop the bout at 1:25.

With the win, Beltran won the opportunity to face the winner of the Robert Easter-Denis Shafikov fight, which takes place on June 10. Easter will defend his IBF 130-pound title.

Welterweight contender Konstantin Ponomarev won a workmanlike eight round unanimous decision over Ed Paredes (38-7-1, with 25 KOs). All three judges scored the bout 78-74 in favor of Ponomarev, who improves to 32-0, with 13 KOs.

Lightweight prospect Teofimo Lopez scored a highlight-reel knockout of Ronald Rivas (5-6-2, with 3 KOs) at 2:21 of the second round. Lopez, who represented Honduras in Rio de Janeiro, improves to 5-0, with 5 KOs.

In junior welterweight action, Fazliddin Gaibnazarov (2-0, 1 KO) of Uzbekistan won a one-sided eight round decision over Augustine Mauras. All three judges scored the bout 80-72 for Gaibnazarov, who won the gold medal at the 2016 Olympic Games.