He’s back. Rios knocks out Herrera in the seventh 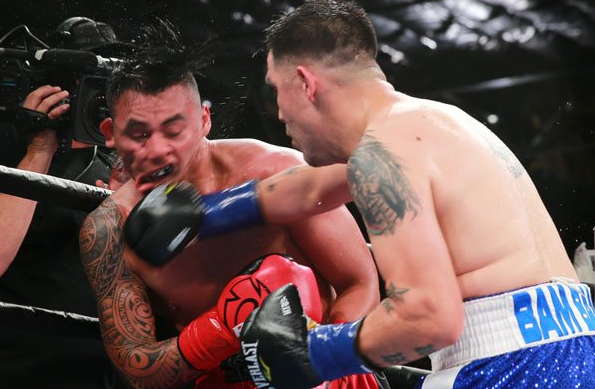 It was a triumphant return for Brandon Rios on Sunday following a 19-month layoff, as he knocked out Aaron Herrera in the seventh round before a near sellout crowd at the Pioneer Event Center in Lancaster, California.

It was a triumphant return for Brandon Rios on Sunday following a 19-month layoff, as he knocked out Aaron Herrera in the seventh round before a near sellout crowd at the Pioneer Event Center in Lancaster, California.

The fight was mostly one-sided. ‘Bam Bam’ Rios (34-3-1, 25 KO’s) went back to being his vintage self, applying smart and relentless pressure from the opening, rocking Herrera with a strong left hand in the opening round, and used surprising head movement early to avoid getting countered. “I was very nervous tonight,” Rios admitted. “I felt just as nervous as I was when I was making my pro debut.”

The former lightweight world champion cut ties with longtime trainer and close friend Robert Garcia at the beginning of 2016 and joined forces with Ricky Funez. Since then, Rios has worked extensively on his jab and head movement, which was exemplified in the ring.

In the second round, Rios landed hard combinations and a counter cross to the head of Herrera. However, sensing that he needed to pick up the pace, Herrera (32-7-1, 21 KO’s) took it up a notch in the fourth and attacked the body and head of Rios with lefts and rights. However, it came back to bite him.

Tired and with his back against the ropes, Rios capitalized and landed a straight right hand to the body that sent Herrera to a knee. The former WBO International super lightweight title contender never attempted to get up.

Rios acknowledged that it was not until the KO that his nerves finally decided to luxuriate. There has also been talk of a potential grudge match between Rios and former world champion Victor Ortiz for a number of years, but it does not appear the two bitter rivals will get to settle their score in the ring anytime soon. “I am over fighting Victor (Ortiz),” he said. “We were supposed to fight, but he didn’t want to. I’ve moved on.”

On the undercard, Mario Barrios extended his undefeated streak to 19 fights by knocking out Jose Luis Rodriguez (21-10, 12 KO’s) in the seventh round with a devastating left to the liver. The 22-year-old struggled early on, but managed to pick up his 11th victory by way of knockout.

Jose Miguel Borrego (13-0, 12 KO’s) got out-boxed for three rounds, but rallied to knock down Kevin Watts (11-2, 4 KO’s) midway through the fourth, and stopped him after a barrage of blows left the American trapped on the ropes with nowhere to hide.