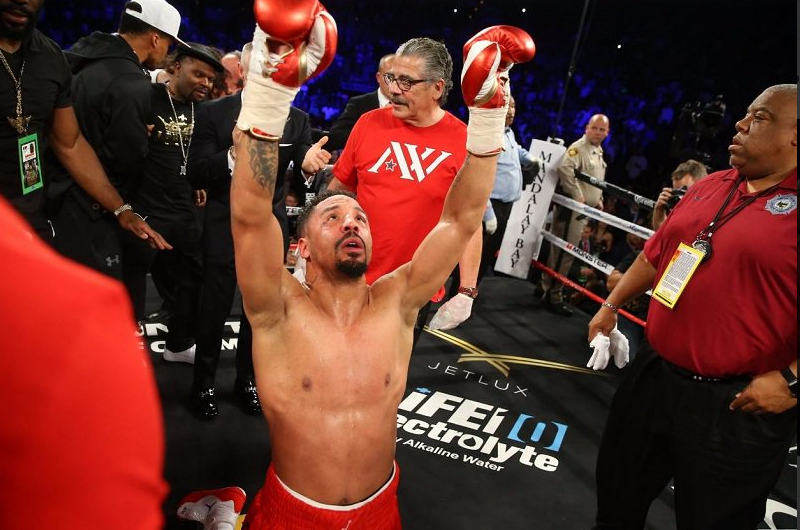 Andre Ward (32-0, 16 KO’s) proved why he is the No. 1 pound-for-pound fighter in the world Saturday at Mandalay Bay Resort and Casino in Las Vegas, stopping former world champion Sergey Kovalev (30-2, 16 KO’s) in eight rounds before 10,592 fans to retain the IBF, WBO, and WBA light-heavyweight titles.

The bout was a rematch from their exciting encounter last November at T-Mobile Arena, which saw Ward rally from a second-round knockdown to snag a unanimous decision victory, albeit a controversial one, to capture three titles. All three judges scored the fight 114-113 for Ward.

However, there was no doubt that Ward earned this one, the biggest of his career.

The fight started with a lot of wrestling on the inside, but it was Kovalev who got the action kicking with two rights to the body on the champion. While a straight right connected for Ward towards the end of the round, the Russian appeared to have the edge.

Kovalev came out very aggressive in round two, but it did not pan out in his favor. Ward snapped his head back with the jab and tied him up on the inside, connecting on solid body shots.

The third round was another close one, but the edge went to Kovalev as he targeted Ward’s body, connecting with a left hook. Ward was also able to land a few lefts of his own and a counter shot, but Kovalev’s shots had more of an effect.

What had been a neck-and-neck dogfight changed in the fourth round as Kovalev exemplified signs of exhaustion, breathing heavy, and not throwing with the same kind of ferocity from earlier in the bout.

In the eighth, Ward, the 2004 American Olympic gold medalist, capitalized by cracking Kovalev with a big right hand.

Sensing his man was in danger, Ward went on the attack, doubling up on shots to the body, and seemingly seeping the remaining energy out of Kovalev.

With the Russian bent over, referee Tony Weeks called a halt to the action at 2:25 of the ninth.

“I knew this fight was going to be different,” Ward said, who improved to 2-0 against his bitter rival. “Kovalev fought a good fight, but once I compute a fighter in my brain, I know what I have to do the next time around.”

Compubox statistics showed Ward being the more effective puncher, connecting on 80 of 238 blows (34 percent), while Kovalev actually landed more punches, but missed 77 percent of his attempted shots landing 95 of 407 (23 percent).

Kovalev did not seem to be unhappy with the call to stop the fight at first, but that changed once he was given an opportunity to speak.

“I could have continued. I didn’t feel the hurt. Why stop the fight? It’s crazy. I want to get (another) fight with him.”

Kovalev claimed the final blow Ward had landed before the stoppage was a low blow. While that may have been the case, it was evident once Ward landed the right hand, Kovalev was looking for a way out. He even turned his back away from the action at one point and earned himself a warning from the referee.

It was a phenomenal performance from Ward, who one day envisions himself fighting as as a cruiserweight or even a heavyweight.

Time will tell just how far Ward can go, but one thing is for sure, no one should ever doubt him or his skills ever again.