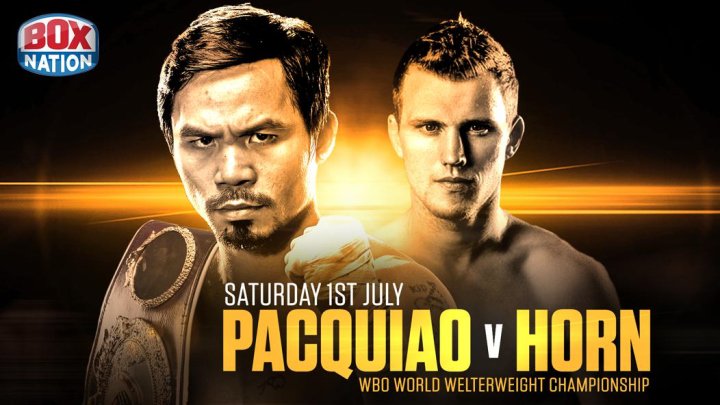 The Telecast will also feature:

Opening the telecast will be an eight-round middleweight bout Shane Mosley, Jr. vs David Toussaint.

Pacquiao has fought and won twice since the 2015 Floyd Mayweather match, Timothy Bradley Jr & Jessie Vargas. Winning both bouts by a twelve round unanimous decision. Pacquiao's been relatively low key since the megafight with Mayweather. His events have not drawn a lot of attention and networks like HBO have not been interested. Honestly this fight is not a good sign for Pacquiao, a fighter who was once one of the only two real draws in boxing. He is fighting a very unknown Jeff horn. Even I a hardcore boxing fan had to look up Jeff Horn to see who this boxer was.

Jeff Horn is from Brisbane, Queensland, Australia. He has been boxing since 2013 and has never fought outside of Australia or New Zealand. The only noticeable person on his resume is Randall Bailey who he fought in 2016 and won by a RTD in round seven. Bailey was down in the 2nd round and Horn down in 3rd round. Of his 17 bouts he has a 65% knockout ratio @ 11 total KOs. While no lost on his record he has a draw from 2013 to Rivan Cesaire.

Pacquiao should not only win this fight but destroy Jeff Horn. IF for some reason Pacquiao loses this fight, he should retire from the sport. In my opinion, Manny is staying active in hopes for a rematch with Mayweather next year. This is not a crazy idea as Mayweather is returning to fight... well... put on an event against UFC Conor Mcgregor. Who know if both Mayweather & Pacquiao win this could lead to another "megafight" and BIG payday for them.