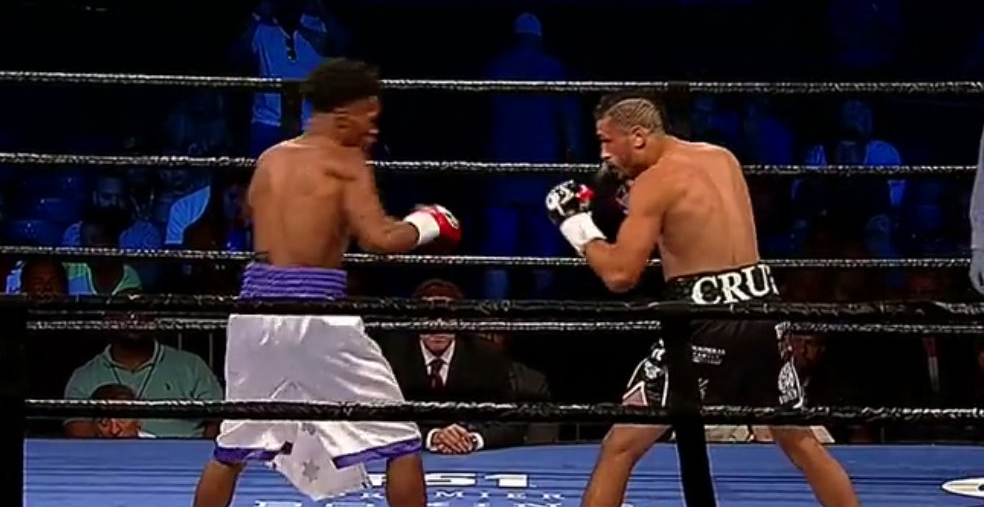 Both fighters started strong using the jab and landing to the body. Martin was more successful landing at this point trying to make a statement early. Martin was also countering well. Then at the last few seconds of the round Martin got caught with a BIG hook that send him to the canvas as the bell rang.

Martin came out strong with legs under him in round two. However Cruz was making thing messy and keeping the pressure. Cruz landing the stiff jab as Martin started to get his legs back looking strong.

Going into the 3rd round Cruz was making the fight a phonebooth brawl. Martin stepping out using his jab to keep the pressure off landing the straight jab to the head then the right to the body. The round ended with a lot of action as both fighters exchanged a lot of punches.

Early in round four Martin was dropped again. He said that he was punch behind the head however the ref called it a knockdown. The replay did show that the punch causing the knockdown was behind the head.

Cruz continued to make the fight a slugfest landing the straight down the middle. Cruz went down from a hard low blow. He had a hard time getting off the canvas from the nut punch. At the end of the 5th round Martin came on strong landing some solid punches.

As the fight continued both fighters were throwing punches and punches trying to make something happen. Martin seemed to wake up landing the combination well to the head and body. Cruz lost a bit steam but was keeping the pressure. With Martin coming on strong with was taking the late rounds on the cards going into the 8th round.

In the final round both fighters try to close strong but they showed a lot of heart standing and trading punches.

Cruz says he is ready for a big fight and wants to compete at a world class level.

In the co-main event Clarence Booth stopped Anthony Mercado in four rounds. The bout was schedule for 8 rounds in the Welterweight division. Not much from the bell as Booth was in control of the fight from round one. The ref stopped the fight after a vicious attack to the body.