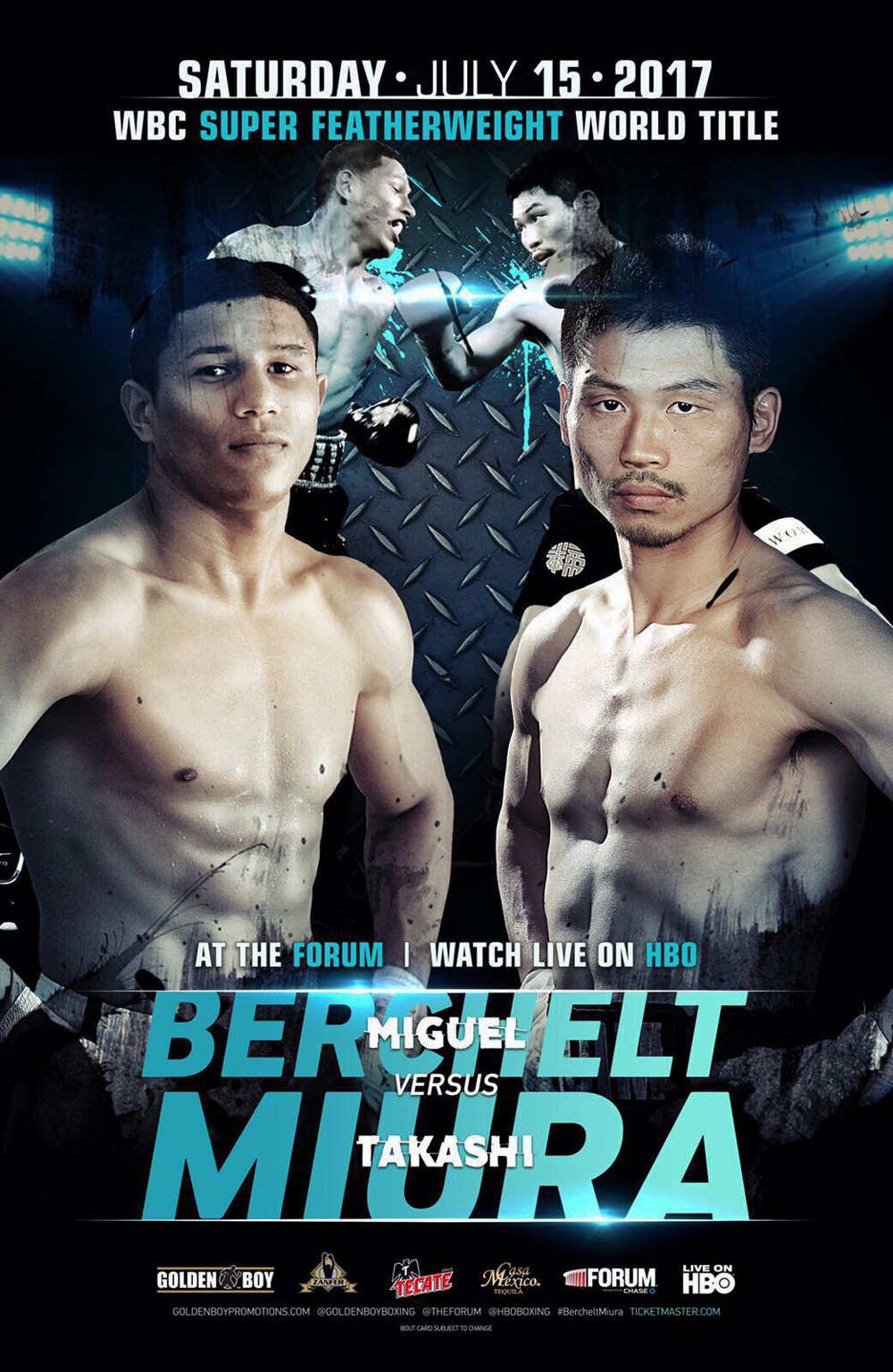 This Saturday, Golden Boy Promotions will be presenting a great trio of fights. HBO Boxing will be live from the Forum in Inglewood, California as the headline will be for the WBC junior lightweight title. The power punching Miguel “El Alacran” Berchelt will be defending his belt against the high-volume punching southpaw from Japan, Takashi Miura. Also on the undercard will be Jezreel Corrales vs. Robinson Castellanos, fighting go Corrales’ WBA junior lightweight title. And also fighting will be a very good bout between Joe Smith Jr. and Sullivan Barrera.

The 25 year old Miguel Berhelt (31-1 with 28 KOs) jumped up rankings and found his way on everyone’s radar when he defeated Francisco Vargas back in January this year. Not only did it disrupt a possible rematch of Vargas vs Miura, which was a fight of the year candidate, it also put him squarely near the top of the divisional rankings. He is hoping to prove that the Vargas stoppage was less about the accumulation of punishment that Vargas had in his previous fights and more about the stoppage power, and skill, of Berchelt.

Takashi Miura (31-3-2 with 24 KOs) also has some pop, but his calling card is his relentless style. He throws a large amount of punches and it wears down opponents. He also faced Francisco Vargas, on the undercard of Canelo Alvarez vs Miguel Cotto, however, after looking like he was in control, and up on all 3 judge’s cards, he was stopped in the 9th round. Miura previously beat Gamaliel Diaz to win the WBC Lightweight title and had 4 successful defenses before losing it to Vargas. His last fight against Miguel Roman was ultra-impressive and he floored Roman 3 times before Roman was counted out in the 12th.

Power is the ultimate equalizer in close fights, and there is an 8 year age difference between these 2 boxers. Miura has been in tougher fights, but his fate could be similar to Vargas, as you have to wonder when it will begin to get to him. However, Miura is still a tough guy and will not go down lightly. Put these reasons together, and my pick is Berchelt by 10th round stoppage.

Jezreel Corrales (21-1 with 8 KOs) is also high ranked within in the junior lightweight division. He’s not a big puncher, but he is very skilled. His claim to face was beating Takashi Uchiyama, someone who was previously looked at as top 5 in the division, not once, but twice last year. Uchiyama had previously defended the WBA junior lightweight belt 11 times before losing it to Corrales. A win by Corrales and a win by Berchelt could setup a unification match down the road between the 2 young 25 year olds.

Robinson Castellanos (24-12 with 14 KOs) is a solid boxer who, despite not being 35, still can hang around the top 10 of the division. He may not be in Corrales level, but he’s a guy that is an okay gatekeeper for the division. He has never won a world title and this could be his last chance. He is sure to give it his all.

I expect Corrales to control most of this fight. Will he be able to stop him? Maybe, maybe not, but I don’t think this one will be very close. I’ll give Castellanos the benefit of saying he will last the distance, but I think Corrales wins this by a solidly wide unanimous decision, around 118-110 with a chance to stop him earlier.

Joe Smith Jr. (23-1 with 19 KOs) is coming off the win of his life. He defeated, stopped, and, for all intents and purposes, ended the career of Bernard Hopkins Jr. Before that win, he was coming off the other fight of his life by stopping Andrzej Fonfara with a 1st round TKO that should the light heavyweight division. He now faces his 3rd straight tough opponent. Will he continue to pile drive through his opponents or will the constant battles eventually catch up to him?

Sullivan Barrera (19-1 with 14 KOs) only has one blemish on his resume, a loss to Andre Ward. He went the distance with Ward and after seeing what Ward did to Sergey Kovalev a month ago, isn’t anything to sneeze at. Barrera has good pop and normally uses his length well with his jab. Sullivan is already 35 and doesn’t have much battle left, so he must take advantage of every fight, like this, that he can get. He got paid very well against Ward and likely is for this one, he’d love to have one more big pay day.

A win here could lead to another title shot, something that neither one of these fighters has had yet. Some were calling for Smith to fight Adonis Stevenson, unfortunately, negotiations broke down. This is the hardest fight of the card to call. Someone will get KO’d in my opinion, but both can equally be the one getting stopped. This is a flip a coin type of fight and my coin landed on head. With that, I’m picking Smith Jr. by 5th round stoppage.

There are 3 fighters ranked in the top 5 of the junior lightweight division and this main event could be a big-time contender for fight of the year. Will Berchelt be able to put away Miura or will Miura’s offense be the best defense? There’s only one way to find out. And with a card that also includes a WBA junior lightweight title fight between Corrales and Castellanos and Smith Jr. vs Barrera bout, this is a can’t miss card. So, sit back, relax, and enjoy the fights.