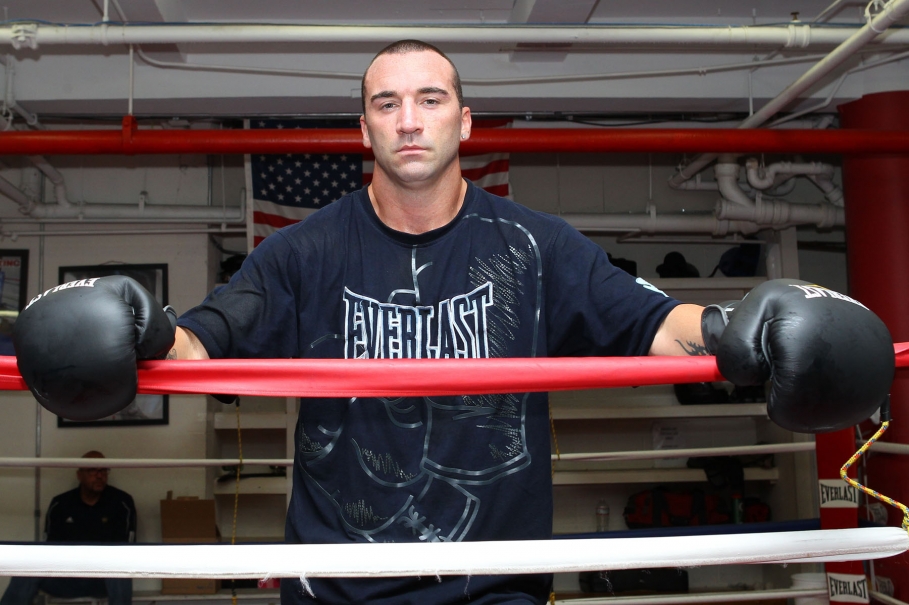 Recently, I had the chance to sit down with Light Heavyweight contender, Seanie Monaghan (28-0 with 17 KOs). He is preparing for his fight this weekend against Marcus Browne (19-0 with 14 KOs) in what appears to be leading towards a title shot for the winner. The fight will take place at the Nassau Coliseum and will be televised on Fox as the co-main to the Omar Figueroa vs. Robert Guerrero fight. In the interview, Monaghan opens up about his almost fight with Adonis Stevenson, the entire light heavyweight division, and his free agent promotional status.

Monaghan, at one point, was told he was going to be fighting Adonis Stevenson. That is where the interview began:

Question: What happened to the Adonis Stevenson fight?

Monaghan: “I wish I knew, I thought it was all a done deal. We never got any official notice that it was over. I found out it was off on Instagram. I got a text message from my sister saying what is this? It was a picture of Adonis’ instagram saying he was fighting Fonfara again. I kind of started getting suspicious of it because I asked ‘Are we going to have a press conference? When are we going to officially say anything?’ No one ever said sorry or gave us an official reason why. We signed contracts and everything.”

Question: Who is the best light heavyweight in the world in your mind?

Monaghan: “You got to give it to Andre Ward now. I know they were borderline low blows, but he stopped Kovalev. I think if Andre would have kept those shots an inch or 2 higher, they would have done the same damage and there would be no controversy. He hurt Kovalev with a right hand and every time he touched him to the body, he was hurting him. At the time of the stoppage, I had Kovalev ahead, but you could tell the whole momentum had shifted and he just looked like he didn't want to be in there anymore. Ward looked like he was just getting started. I got a call to fight Andre Ward about a year or 2 ago and I was so happy, I said let's do it and he just negotiates like a beast on every single little thing. The fight was in 4 or 5 weeks, in Oakland, and it wasn't a bunch of money. I said, maybe they are playing hardball, so I didn't take the 1st offer. I said let's go back and forth and my manager said that's it, that's the only offer they have.”

Monaghan said that camp is going great right now. He was weighing 183 pounds as of last weekend and he said that if he wakes up at 179-180 for morning of the weigh in for this fight at 175, he can easily work out and sweat it out. However, Monaghan usually is a fighter that fights often. He has only fought once in the last 16 months, which led to my next question.

Question: You're used to fighting 3, 4, 5 times a year. You've fought once since Janne Forsman in February of 2016. Will that have any effect on your sharpness?

Question: Do you go into this thinking you need to stop Browne?

Monaghan: “I know I'm going into enemy territory, he's with Al Haymon. I didn't think he won the Hot Rod (Radivoje Kalajdzic) fight and I thought he should have been disqualified the fight after that when he hit the guy (Thomas Williams Jr) when he was down. What I really want is to be a crowd pleaser. I want people to say 20 years down the road, man that was a great fight. I don't want a fight when you're getting held every 10 secs and the ref does nothing about it. He got warned about 20 times in the Hot Rod fight for holding and it kind of ruined the fight. The fight can get ugly with him.”

In the talk about bad decisions, it led to Monaghan’s thoughts on the Manny Pacquiao vs Jeff Horn fight that happened this past weekend on ESPN.

Monaghan: “That was actually cool. It looked sick. It was an outdoor fight. It was in Australia. I thought it was a good fight. I had it 7-5 Pacquiao. They were yelling ‘It’s the biggest robbery of all time!’ Timothy Bradley was the only one that said it, this fight was closer than you think. I thought Jeff Horn was doing his thing. Obviously, he's not going to match Pacquiao for speed or ability, but he's a big, strong, rough, Australian guy. So, he's in there and doing what he's got to do. I think he did the best he could possibly do with his ability. Now the judge that had him winning 9 rounds, I don't agree with that, but I thought it was close. I didn't know what the announcers were looking at.”

Question: Since Browne is probably your toughest opponent, what are some of the things that you must be extra aware of?

Monaghan: “He's fast. He's a defense 1st guy. He hits pretty hard, but I've been hit harder. He going to try to be a tree that I got to chop down.”

Question: Does it get frustrating that the guys at the top of the division always pass you over?

Monaghan: “It's super frustrating. It's been more than Stevenson and Ward."

Monaghan then went on to explain that he almost got a shot with Jurgen Brahmer, who was the WBA champion at the time, but Brahmer opted for Eduard Gutknecht. He also missed out on Beibut Shumenov who was also a WBA champion at the time, but Shumenov took a fight against Bernard Hopkins instead, lost, and the title was then in Golden Boy's hands. With the bitterness between promotional companies, Monaghan knew his chances were done.

As soon as he became a FA, calls were coming in for him, including one that asked if he wanted a shot at Adonis Stevenson, which was talked about above. He does not have Al Haymon as a manager or advisor. He is currently doing a multi fight deal with promoter Lou DiBella. Part of the deal with DiBella is that he will not have longer than a 6 month layoff for a fight.

Monaghan also said, “Lou said the winner of this is going to get a shot at a world title. Since he's linked with Al Haymon, I'm assuming that means Stevenson, but he's got a couple of options right now. He's got to fight Alvarez, at some point. If Ward moves to cruiserweight, like he said, and vacates, that would mean there are 3 vacant belts around and I'd have to assume I'd be in line for 1 of those belts after beating Marcus Browne and moving to 29-0.”

Monaghan still hopes to get a fight against Joe Smith Jr, saying "It makes too much sense. Too many people in the media and on TV have told me that fight makes sense." HBO has so far declined to pay for that fight.

Monaghan: “Nah, hell no. I hope not. I'd like to retire before 2020, cause it just sounds late. I don't want to be in there at 40 years old. But I'm out there running sprints with guys in their 20s. I go through multiple young guys in sparring. No kid is going to beat me in a fight.”

Monaghan and Browne are actually cool with each other and sparred numerous times. Browne even sent a congratulations text to Monaghan when it was thought he was getting the Stevenson fight. Monaghan said the 2 obviously aren’t on speaking terms now. With what could be a title shot up next, the 1st for both men, there are no friends on Saturday night and to the victor, belongs the spoils. Enjoy the fight.