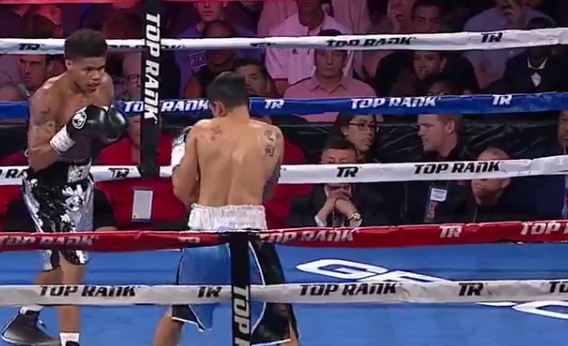 2016 Olympic silver medalist featherweight Shakur Stevenson, kicked things off on the ESPN telecast taking on David Paz. Shakur Stevenson stayed tight and controlling the range kicking things off in round one. David Paz came out swinging for the home-run trying to land that big punch. Stevenson had a lot of moments of success by landing to the body. Starting round four Stevenson landing an explosive combination on David Paz that did not look like it did much damage. Shakur Stevenso has some tools, he is patient, lands to the body and establishes the jab. This worked well throughout the fight as David Paz was only landing 15% of his punches. In round five Stevenson dropped Paz who beat the count to continued fighting on into the next round. Stevenson, looked fresh & sharp ending the final round as Paz was clearly beat but finished the fight.

It will be interesting to watch the rise up for Shakur Stevenson, over the next few years. He has ll the right tools and seems to know how to execute them.