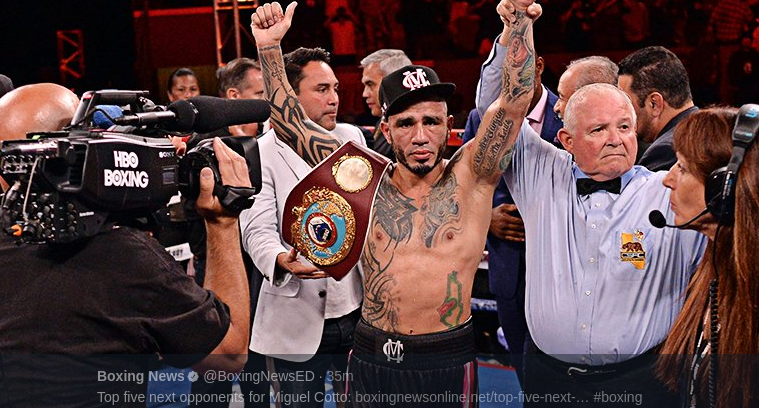 Miguel Cotto returned to the ring Saturday night at the Stub Hub Center in Carson, California against Japan’s Yoshihiro Kamegai. The fight was aired live on HBO boxing. Cotto won the WBO 154lbs title by

It was an action packed fight from the first round. Cotto fought and won a hard decision over Kamegai who kept coming forward all night, scores - 120-108, 119-109, and 118-110. The championship rounds were all Cotto as he kept it conservative but active landing well with precision.

Kamegai came right at Cotto throughout the fight trying to entice him into a brawl. Sneaking right hands in when he could but Cotto's countering was landing well. The fight had is action packed moment in a phonebooth style fight. Kamegai continued to go at him taking his best shots as Cotto boxed away power shots.

Nothing seemed to bother Kamegai as he kept walking into Cotto’s power punches. Cotto continued his dominance as Kamegai’s heart pushed him forward.

in the last round Cotto's punches proved to show a lot of wear and withstood constant pressure from Kamegai.

Cotto (41-5, 33 KOs) won the sixth world title in his career and will return to the ring this December hoping for a BIG fight.