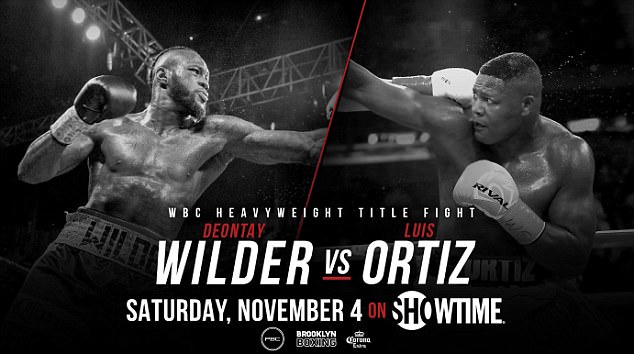 He has been criticized for his lack of quality of opposition, but Deontay Wilder will square off against his sternest test to date when he faces the dangerous Luis Ortiz on Nov. 4 at Barclays Center in Brooklyn, New York.

Wilder (38-0, 37 KO’s) knows that now was the time to kick it up a notch and take the harder, more challenging fights so that he can gain the respect he believes he deserves.

“If he’s the boogeyman. I can’t wait to shine a light on him [Ortiz] because the boogeyman is only effective at night. And, we’re in New York, so you already know what happened to King King in New York,” Wilder said.

Wilder, 31 of Tuscaloosa, Alabama, will get that chance against Ortiz, but it won’t be easy. The Cuban comes with a very solid amateur pedigree with a reported record of 343-19, and devastating power.

But Wilder is an underrated boxer himself. He captured Olympic bronze at the 2008 games in Beijing and had an approximate amateur record of 30-5. Although he is mostly known for his power and rightfully so with a 97% KO percentage, he exemplified his boxing skills against Bermane Stiverne in January 2015 to claim the WBC heavyweight world title. Now, he is looking at potentially his sixth defense in November.

“I’m going to set him up until the time comes. Ortiz has a great set of skills, and I like his aggressive style,” he added. “That’s one of the reasons I chose him. I wanted to beat him to prove that I am the man.

“It definitely won’t go the distance. Right now, I’m thinking about three rounds, but come November 4th, it might be in the first round.”

Ortiz (27-0, 23 KO’s), 38, originally of Camaguey, Cuba, has not fought all year. His last fight was a seventh-round TKO in December 2016 over David Allen in a scheduled eight-round contest in Manchester. Despite the layoff, Ortiz is ready to brawl.

“Wilder should sign his death sentence. I’m very different than anybody else that he’s fought. I punch harder than anybody else,” Ortiz said. I’m going to teach him not to mess with Cubans.

“Some skeptics are talking about my age, but look at [Floyd] Mayweather. I still have my speed and my quickness.”

Ortiz faced his toughest test to date in December 2015 when he stopped Bryant Jennings in the seventh round to retain the interim WBA heavyweight world title.

Both fighters are facing each other at the perfect time in their careers. Both have incredible skill but are relatively untested against top-level opposition.

Who will be the last man standing?