Trout: This could be my last shot 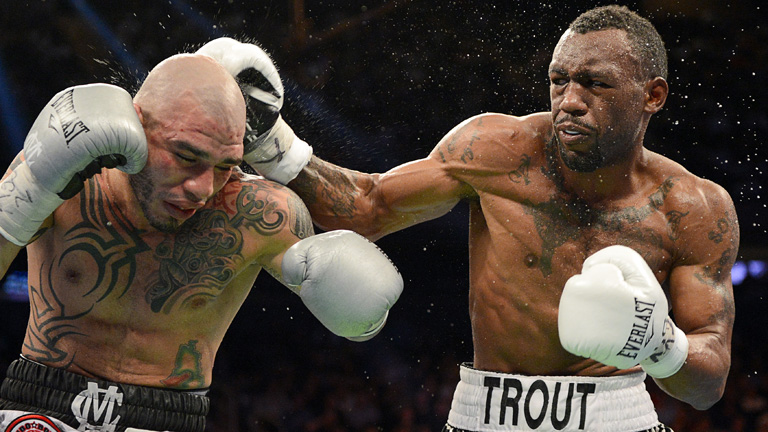 He defeated Rigoberto Alvarez by unanimous decision to win the WBA title in 2011, and went on to defend his belt four times, including a clear decision win against Miguel Cotto in 2012, but lost his next two fights to Canelo Alvarez, in a very close bout, and Erislandy Lara in 2013.

Trout (30-3, 17 KO’s) a 32-year-old southpaw from Las Cruces, New Mexico, has been on the comeback trail since. He racked up four consecutive wins before losing to Jermall Charlo last year for the IBF title, and will have a second swipe at glory when he faces the undefeated Jarrett Hurd (20-0, 14 KO’s), 27, of Accokeek, Maryland, who won the vacant 154-pound world title by knocking out Tony Harrison on Feb. 25 in Birmingham, Alabama, on Oct. 14.

It is certainly a must-win for Trout, who was recently asked if he believes this is his last chance of being a world champion.

“Physically, mentally, no. Politically? Yes – if that makes sense,” Trout told Low Blow. I feel like there’s a lot of guys I can beat out there, including this man in front of me. Politically, I don’t know if they’re going to allow me [to have] another shot if I don’t come out on top of this one.”

After being forced to wait 17 months to get another fight, Trout understands what is at stake if he comes out with another loss.

“If you can see it on my face, it’s very frustrating,” he added. “There was no good reason for the long layoff. God has his own plans. I just gotta follow suit. This was his plan to have me layed off for this long, but he blessed me with a title shot, so I am gonna take full advantage of this opportunity.”

Although Hurd comes into this fight with six consecutive knockouts, Trout would be the biggest name on his resume.

The bout is just one part of a Showtime tripleheader which also includes Jermell Charlo (29-0, 14 KO’s) defending his WBC 154-pound champion against 21-year-old Erickson Lubin (18-0, 13 KO’s). The main event will feature Erislandy Lara (24-2-2, 14 KO’s) squaring off against Terrell Gausha (20-0, 9 KO’s) in a defense of his WBA super world junior middleweight title.