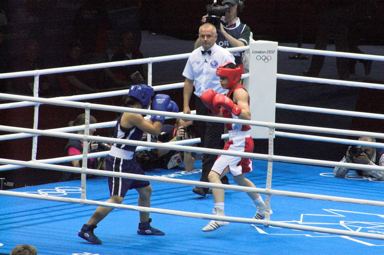 The focus of the boxing world will switch to Cardiff on October 28th as world heavyweight champion Anthony Joshua takes on Carlos Takam in his latest high-profile outing. The highly popular British champion dethroned Wladimir Klitschko earlier in the year in front of an incredible 90,000 supporters at Wembley Stadium in London. His next challenge comes from Carlos Takam, as the pair prepare to collide on Welsh territory.

But while "AJ&" will take to the ring in the main event, there's another talented former Olympic gold medallist that will be featuring on this action-packed card on Welsh soil.

Ireland's boxing queen Katie Taylor has been busy rampantly dispatching any woman put in front of her since turning to the professional ranks after an established and glittering amateur career. The Wicklow-born brawler has captured the imagination and hearts of boxing fans with her sublime ring talents since switching to the paid scene and her efforts have seen her gain a shot at world title honours.

Before Joshua takes to the ring to defend his heavyweight crowns against Pulev, Taylor will attempt to become only Ireland's third ever female world champion, and the second ever professional world titlist. She would follow in the footsteps of both Deirdre Gogarty and Christina McMahon if successful in Cardiff, with both of these women having previously reigned supreme at the pinnacle of the sport in 1997 and 2015, respectively.

Bray-born talent Taylor will come up against a vastly experienced two-weight world champion and current WBA lightweight title holder Anahi Sanchez on Welsh soil, who only picked up her present strap earlier this year.

The 31-year- old puncher will no doubt climb through the ring ropes on October 28th as the 1/33 odds-on favourite in the latest boxing betting. She has justified her price as the favourite after such strong performances since joining up with Eddie Hearn's Matchroom Boxing promotional stable.

The hard-hitting Irishwoman has been in sublime form since ditching the amateur game, stopping four of her six opponents so far, including last time out against Jasmine Clarkson on what was her impressive American debut at the Barclays Center in New York City. This was on the undercard of the highly awaited and intriguing match-up between Adrien Broner and reigning world champion Mikey Garcia, a huge platform on which she showcased his mercurial abilities.

Next up is a promising trip to Cardiff for a well-deserved world title bid, as she attempts to clinch such a prestigious honour in only her seventh pro outing. Notably, winning a world crown in her seventh bout would match the feat also achieved by the last Irishwoman to reign supreme several years ago, Christina McMahon.

The former Olympic boxing queen has long been tipped for professional success, even before bursting onto the scene with an explosive debut back in November 2016, but Taylor now has a glorious chance to finally obtain the biggest and most illustrious honour of her already glowing career this October.