Exclusive: Sergey Kovalev ready to reclaim dominance in the light-heavyweight division ahead of return 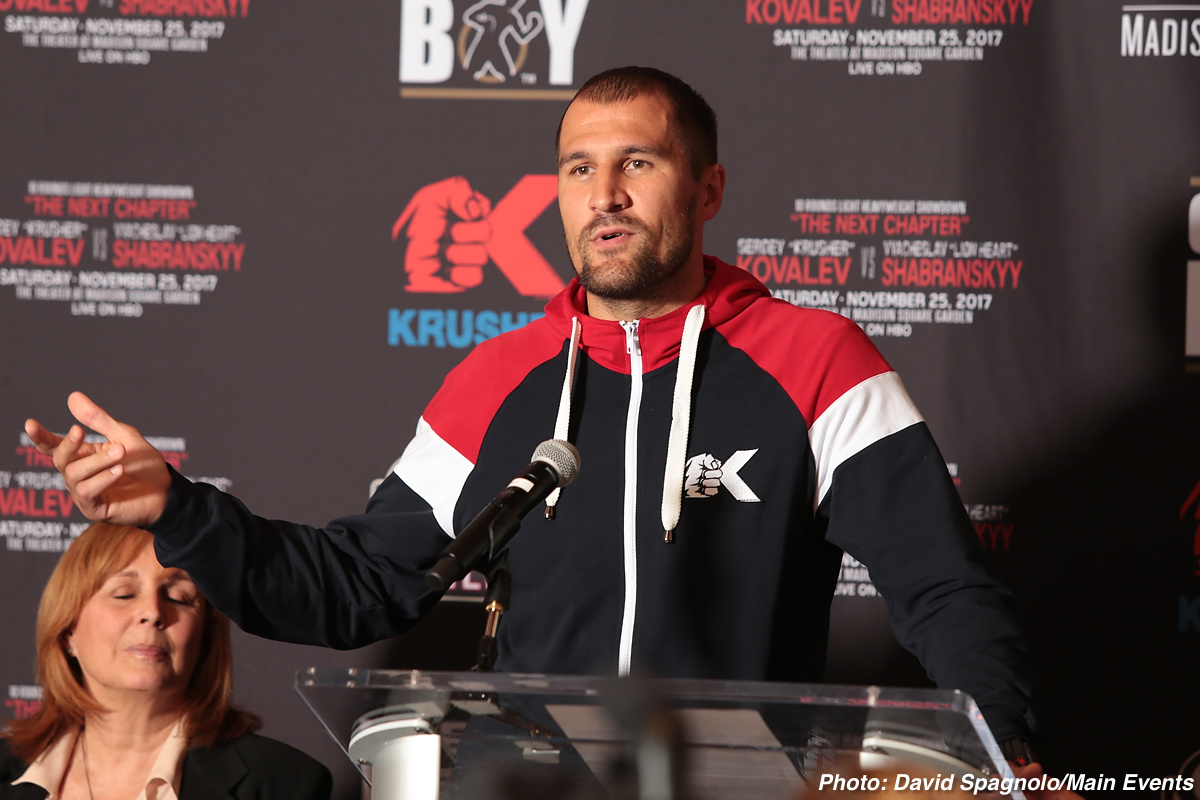 After the retirement of former opponent Andre Ward, former unified light-heavyweight champion Sergey Kovalev is ready to reclaim the number one spot in the division.

The 34-year-old will return to the ring on Nov. 25 in a 12-round headline championship fight on a HBO-televised tripleheader (10 p.m. ET/PT) at The Theater at Madison Square Garden in New York. He will face Ukrainian Vyacheslav Shabranskyy for the vacant WBO 175-pound title.

The fight initially was a scheduled non-title bout for Kovalev's return. His promoter Main Events petitioned for the fight to be for the vacant WBO belt last month, and at their annual convention the fight was approved to be contested for the title.

Back in the summer, Kovalev decided to part with his former trainer John David Jackson after suffering back-to-back defeats to Andre Ward. The day after his next fight was elevated to a WBO championship fight, he announced he had hired Abror Tursunpulatov as his new cornerman ahead of his upcoming fight. Kovalev based his training camp for this fight in Big Bear Lake, California, and had been training without a head trainer. He had linked up with Tursunpulatov through his promotional company and Egis Klimas, and believes he is the man to guide him back to the top of the division heading into the new chapter of his career.

''My camp is going great with a new coach and we are preparing very well for this next fight,'' begun Kovalev. ''When I found out that this fight was now going to be for the title, I was very excited. God blessed me with this opportunity to become world champion again, and we are working very hard to make sure that we get this belt.''

Kovalev's opponent Vyacheslav Shabranskyy is a heavy underdog heading into this fight. The 30-year-old made his professional debut in 2012 and has only suffered one defeat to Sullivan Barrera in December 2016. He has won his last two fights since that defeat to put himself in a position to fight for a world title.

''Vyacheslav Shabranskyy is a very good fighter. He can punch, he can box and he can fight. This will make for a very good fight. He's a dangerous fighter and I am expecting a good fight, especially now it's for the championship and he wants to become champion. I should be very careful and very focused for this. I am ready, I am ready for this fight,'' stated Kovalev.

This fight will be Kovalev's twelve straight world championship bout since winning his first title back in 2013 against Nathan Cleverly. There were talks of potential retirement after suffering his second defeat to Andre Ward back in July and also a possibility of moving up in weight to cruiserweight before this fight was announced. Kovalev is unsure how much longer his career will continue, but he has intentions of dominating the division once more.

With Andre Ward's retirement, the division has been opened up with three of the four titles becoming vacant. The WBA champion is now Dmitry Bivol, and the IBF title will be contested on Nov. 11 in Fresno, California. A former amateur opponent of Kovalev in Artur Beterbiev will be facing Enrico Koelling for the belt. A potential fight with WBC champion Adonis Stevenson has been talked about for several years and both sides have attempted to negotiate to make the fight happen on a number of occasions. Once he wins back his WBO title, Kovalev will sit down with his team and will be immediately looking to unify with all of the champions.

''I am ready to fight anybody in the division. All of the fighters that are fighting for the belts. When I beat [Vyacheslav] Shabranskyy and I become world champion again, I am ready to fight any champion for a unification. I am a fighter and I am here to give the fans good fights. I want to perform for the fans, I want to thank the fans for supporting me through my career and I promise a great fight.''