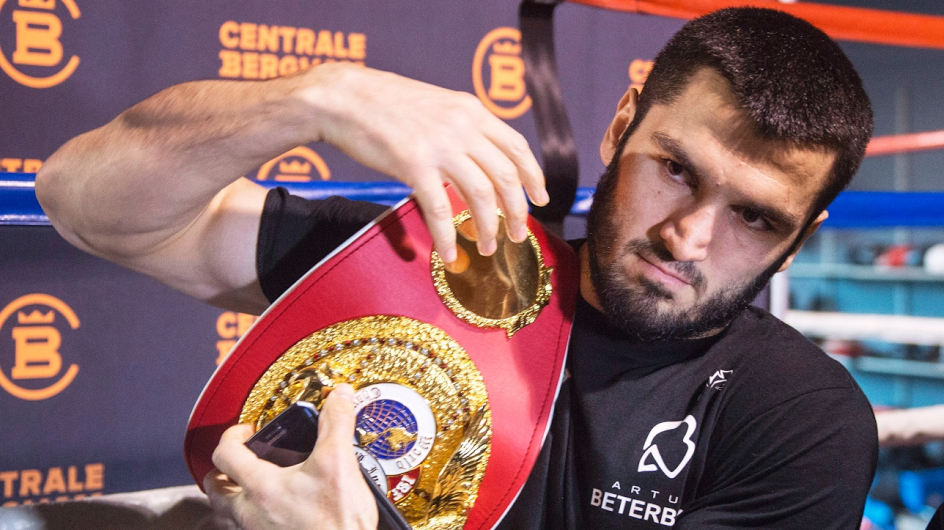 Back in 2001, Artur Beterbiev suffered the tragic loss of his father in a car accident that left him and his family in a terrible financial state. At one point his brothers had to sell their car so he could afford to enter one of the junior amateur tournaments. His father refused to allow his son to become a professional boxer, up until he won the bronze medal at the World Championships at 16-years-old. Five days after winning the medal, his father lost his life and Beterbiev had a promise to become a world champion since that day. One week ago, he finally achieved that dream.

This past Saturday night, Beterbiev (12-0, 12 KOs), who had an established amateur career with over 300 victories and twice represented Russia in the Olympics, stopped German Enrico Koelling win to claim the vacant IBF light-heavyweight title at the Save Mart Arena in Fresno, California. The Russian needed all 12-rounds but dominated Koelling throughout the course of the bout before dropping him for the first time off a combination of punches and finished the fight with a right hand in the last minute of the fight.

''My fight against Enrico Koelling went according to the initial plan. Moreover, it went even better than I had expected,'' begun Beterbiev. ''Yes, there were twelve rounds, but I do not have the slightest regret about that. Even if it had ended with a unanimous decision in my favour, I would not have been disappointed. I wanted to test myself how I would feel on the ring during the 12 rounds. The more the fight progressed the more interesting it became for me. Koelling is a good fighter, and we expected his tight defence. We were ready for this scenario.''

Enrico Koelling refused to engage at all throughout the contest with Beterbiev and consistently backed up to the ropes and tightened up and had very limited offence to offer back. Beterbiev won every single round heading into the last three minutes with all three judges scoring it 110-99 at the time of the stoppage. CompuBox had Beterbiev landing 322 of 1,111 punches (29 percent) with Koelling landing 64 of his 252 blows (25 percent).

''My coached told me to be patient and to take control of the fight right from the beginning. I followed his instructions and did not accelerate the pace of fight. Too much was at stake, it was a title fight and there was no reason to take a risk. Any boxer may have a lucky punch, so we wanted to exclude any risk. In the second half of the bout my coach saw the signs of fatigue in my opponent, so he asked me to press harder. I followed his instructions and accelerated the pace of fight,'' said Beterbiev.

What could be ahead for the 32-year-old going into next year is currently up in the air. With his active lawsuit with his promoter Yvon Michel of GYM Promotions still ongoing. The fight with Koelling had been cancelled back in the summer after a contract dispute and went ahead after Top Rank Promotions won the purse bid to stage the fight. Beterbiev is hoping to settle his termination from his current promotional contract and sign with a new promoter and hopes to be back in early 2018 for his first title defence.

''I would like to have two or three fights in 2018,'' revealed Beterbiev. ''If I could choose an opponent, I would have chosen someone in the featherweight or bantamweight division. Seriously speaking, I am ready to face any opponent in my division. I hope to be back in the ring soon, but it also depends on some other factors out of my control. Yes, surely I would like to defend my title in Russia. Everything comes at the right moment. Even these set backs. Sometimes we may think that something happening to us is bad, but in the end it turns out to be good.''

One fight that has been talked about for a while and has been brewing in the headlines as of late, is a potential fight with fellow Russian and former unified 175-pound champion Sergey Kovalev. The pair collided in the amateurs with Beterbiev winning both fights, although Kovalev claims the fights were fixed with corrupt judges. Kovalev will fight Vyacheslav Shabranskyy on Nov. 25 for the vacant WBO light-heavyweight title and Beterbiev says if he is victorious then he will be looking to discuss a fight with him.

''He speaks a lot. If he speaks to get publicity, good for him. I am not this kind of person. This is not my style. I respect him as an athlete because of his achievements in the professional career. Any boxer who wins the belt deserves respect for his accomplishment. If Kovalev wins his bout on Nov. 25, I will be open to discuss my fight with him. As for his bad remarks against me. You know, teachers tell my son at school, If someone tells bad things about you, those bad things apply to him in the first turn.''

Beterbiev has been very active on social media in terms of responding to his fans. Despite being out of the ring for course of 2017, he is grateful to the people who have continued to show support to him through the issues he's had.

''I thank all my fans for your great support and I am very grateful to you for believing in me from the very beginning of my professional career.''