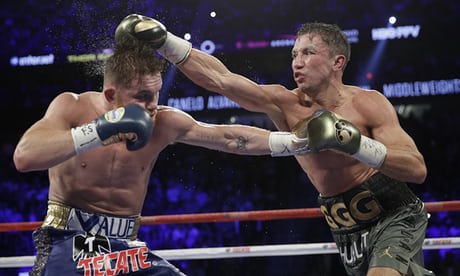 The highly-anticipated middleweight title rematch between Canelo Alvarez and Gennady Golovkin is in serious jeopardy and signs are pointing towards possible cancellation.

The Las Vegas Review-Journal reports that an MGM official has revealed through a text message that fans who have already purchased tickets can receive a full refund.

“In the event a fan requested a refund, they could get one at the original point of sale and in full,” the message read via LRJ.

The second fight between Alvarez and Golovkin, currently scheduled for May 5 at T-Mobile Arena in Las Vegas, was already on the ropes following two failed drug tests by Alvarez.

Canelo (49-1-2, 34 KO's), 27, the lineal 160-pound champion, tested positive for trace amounts of the banned substance clenbuterol in random urine tests conducted by the Voluntary Anti-Doping Association on Feb. 17 and Feb. 20 in his hometown of Guadalajara, Mexico. As a result, he was temporarily suspended by the commission pending an April 10 hearing.

Alvarez blamed the positive tests on contaminated beef, which has been an issue in Mexico for years. Ranchers have been known to use Clenbuterol in their feed, even though it is banned.

In 2016, Mexican authorities inspected 200 slaughterhouses and found Clenbuterol in livestock at 58 of them (29 percent). The World Anti-Doping Agency also issued a warning for athletes in 2011 to "exercise extreme caution" when consuming meat in China or Mexico.

HBO did not promote the bout during its telecast of Saturday's heavyweight title eliminator between Dillian Whyte and Lucas Browne, another sign that the sport's biggest fight may not happen after all.