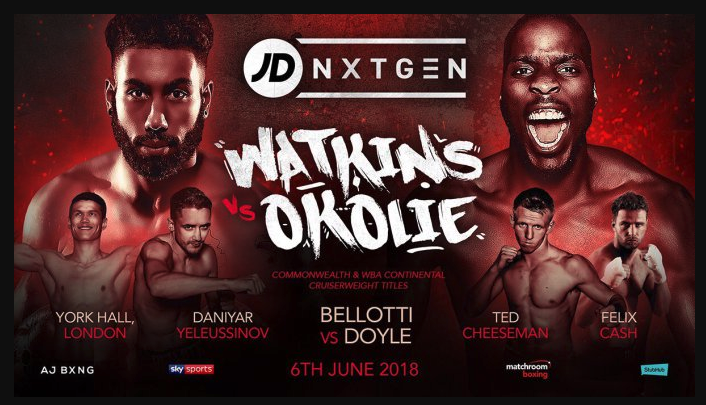 There is expected to be considerable pressure on Okolie after the rather lukewarm reaction to his clash with Issac Chamberlain at the O2 Arena in February, where in the process of claiming the WBA Continental Cruiserweight title the Hackney fighter nevertheless failed to put away in 10 rounds a smaller and seemingly inferior opponent. ‘The Sauce’, however, argues that he will be better prepared when he faces off against Watkins, after admitting that he let himself get caught up in the pre-match hype before the Chamberlain fight.

In what will only be his ninth fight as a pro, the 25-year-old Olympian Okolie is undoubtedly taking on the biggest match of his fledgling career — and in Watkins the best opponent he has faced thus far — and so if he manages to win and pick up a Commonwealth title so quickly, it will be regarded as a real achievement and one which may well make the boxing world take him very seriously indeed.

However, although The Sauce scored KO wins in the first round in his first four professional fights, and undoubtedly has plenty of power, there is some doubt about whether he has the experience and guile to damage Watkins, given his inability to punish Chamberlain in February.

This is reflected in the fact that defending champion Watkins is the early favorite to hold on to his title with all the major bookies, although most of the markets have yet to be framed. This favoritism comes on the back of a record that has seen the Swindon man go 13-0 in his professional career, during which he has earned a reputation as a ferocious competitor, with nine KOs in his thirteen wins.

Many observers think that the 28-year-old Watkins will also have the edge when it comes to fight management and tactical nous, having boxed 65 rounds as a pro compared to only 25 by his opponent. Watkins’ sixth round KO win against Robin Dupre in October 2107 when he claimed the Commonwealth title was especially impressive, and was his first defense against Mike Stafford in December, and it is hard at this stage to see him losing his perfect record.

Whatever the outcome, the fight is expected to be a highly entertaining affair and with the two boxers having similarly explosive styles, there are sure to be fireworks. The atmosphere at York Hall should also be electric, as this is a fight more suited to this sort of traditional boxing venue rather than the expanses of somewhere like the O2.

There has been some gentle sparring between the two on social media in the immediate aftermath of the fight’s announcement, but thus far it hasn’t reached the heights of what we saw in the lead up to Okolie v Chamberlain. The most feisty Twitter exchange to date has involved Okolie asking on the social media platform what sort of sauce he should bring on the night, with Watkins replying that he should make it hot, as the champion was going to bring fire.

Apart from this minor engagement, both fighters and their camps at this stage seem happy enough to save their real exchanges for the ring on 6 June, with the fight being screened live on Sky Sports.