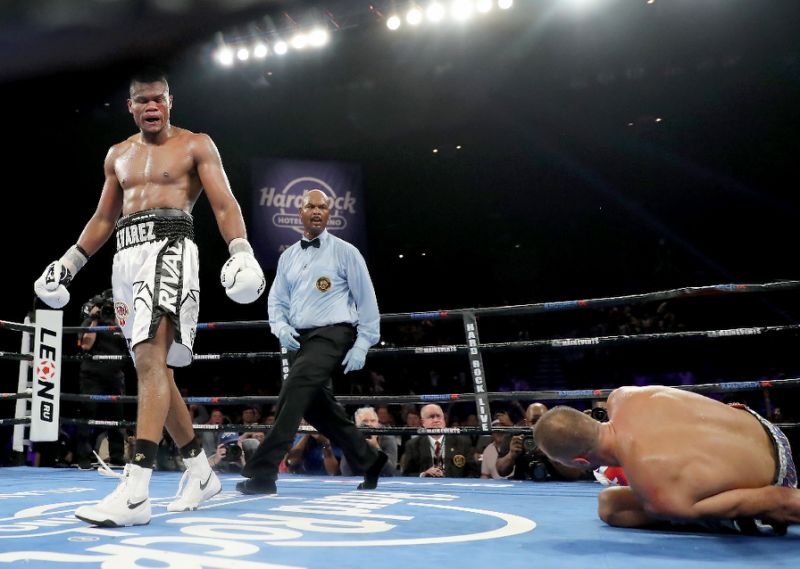 Eleider Alvarez has long-awaited for his opportunity to fight for a world title, and before a sold-out crowd of 5,642 at the Mark G. Etess Arena Saturday at the newly opened Hard Rock Hotel & Casino in Atlantic City, the 34-year-old scored a seventh-round stoppage of Sergey Kovalev.

It was the first major fight in Atlantic City since Kovalev brutally dominated Bernard Hopkins at Boardwalk Hall in November 2014 in a three-belt unification fight, but this time, it was Kovalev who was on the receiving end.

Kovalev was leading 59-55 on two cards and 58-56 on a third when Alvarez caught and badly hurt Kovalev with a clean right hand to the head. Alvarez had been landing hard jabs and short, crisp counters prior to the knockdown, but Kovalev got lazy defensively, and Alvarez made him pay.

Kovalev got up quickly, but it only got worse from there as Alvarez (24-0, 12 KO's) rocked him with an uppercut and a hard jab that nearly sent Kovalev's mouthpiece flying. Kovalev tried to keep his hands up, but pure exhaustion sucked him in as Alvarez took advantage of the openings, and continued pounding away at Kovalev, sending him to the floor again with a vicious combination.

Kovalev (32-3-1, 28 KO's), 35, a Russia native residing in Los Angeles, appeared to be done, but referee David Fields allowed him to continue, which was a mistake. Alvarez, a 2008 Olympian, nailed him with another left-right combination almost immediately, and Fields jumped in to stop the fight.

"Words cannot describe how I feel," Alvarez said through a translator. "I want to thank God and all my fans in Canada and Colombia. This was all for them. It was a two-punch combination that I have been throwing my whole career, and we worked on it in camp. I have always practiced that in camp, and we thought it would work in this camp."

After the fight, Kovalev was transported to the hospital.

"I am feeling good," Kovalev said. "[I] just missed one punch and [I] couldn't continue the fight. I didn't know what happened.

Both fighters tried to feel each other out in the opening round. Kovalev attempted to find an opening for his signature right hand, and Alvarez worked behind the jab.

But despite connecting with a good left hand to the head and the body early on, Kovalev appeared to be overtrained and flat.

But Kovalev had a strong fourth round, buzzing Alvarez with a pair of combinations and hard jabs. Alvarez shook it off and taunted Kovalev later in the round, but an accidental head-butt caused blood to stream down the left side of Alvarez's face.

Alvarez cracked Kovalev with the big right hand in the seventh round, which all but sealed the deal.

Kovalev has now been knocked out in two of his three defeats. After losing three light heavyweight world titles to Andre Ward by a controversial unanimous decision in November 2016, he was subsequently knocked out in the eighth round of an immediate rematch in June 2017.

But Kovalev never accepted or took responsibility for either of the losses, mocking Ward [whose ringname was Son of God] by calling him "Son of Judges" and made childish excuses about low blows in the second fight. Then, Kovalev fired his trainer John David Jackson, and hired Abror Tursunpulatov.

The pair enjoyed some early success.

Kovalev regained one of his old titles last November following Ward's retirement, knocking out Vyacheslav Shabranskyy in the second round of a much-criticized title fight, and defended his title in March against little-known Igor Milhalkin. But Kovalev was in a real fight against Alvarez, who was ducked for years by WBC world titleholder Adonis Stevenson, and for good reason.

Kovalev's future in boxing is unknown, but Alvarez now has the world ahead of him.