Charles Martin wants another shot at Anthony Joshua: That wasn't a real fight! 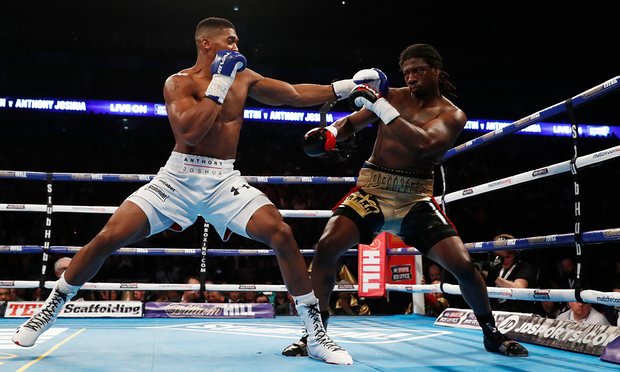 Former heavyweight champion Charles Martin wants another shot at three-belt unified heavyweight world titleholder Anthony Joshua, and has stated that their April 2016 bout, was not a real fight, stealing a line from former UFC champion Jose Aldo, who also said his first-round KO loss to Conor McGregor in 2015 "was not a fight."

But there's a problem.

It was a real fight and Martin (25-1-1, 23 KO's), 32, a St. Louis native fighting out of Carson, California, was knocked out in the second round after Joshua, a 2012 Olympic gold medalist, sent the defending champion to the canvas twice. The fight also marked the first world title for Joshua, who at the time improved his record to 16-0 with all 16 wins coming by way of knockout.

"That wasn't a fight. I don't consider that a real fight, man. He never saw me. That wasn't no Charles Martin. People don't know. That's why a lot of the people that were with me, aren't around me now. Dumb decisions cost people their jobs. [The experience] was cool. It didn't go how I wanted, because of things that happened during the process. It wasn't perfect, for sure," Martin told Sky Sports.

Martin captured the vacant IBF heavyweight title in January 2016 by third-round TKO after Vyacheslav Glazkov suffered a knee injury, and was rendered unable to continue. Glazkov went down twice in the third round from slips, but referee Earl Brown ruled the second slip a knockdown, although Martin never landed a punch. The bout was stopped, Martin was crowned the champion, and Glazkov was later diagnosed with a completely torn ACL, a dislocated knee, a torn medial meniscus, and sprains of his MCL and LCL. He has not fought since.

Martin's reign as champion of the world was the second-shortest in heavyweight boxing history (85 days), after Tony Tucker's 64 days in 1987 when he lost a three-belt unification fight to "Iron" Mike Tyson by unanimous decision.

Martin also blamed the defeat on a lack of rest, but in prior interviews with the media, he also pointed towards a lack of mental preparation.

"My whole career from the amateurs to the pros was back-to-back-to-back, and I never had any time off. I wanted time off, period. I did everything in a short amount of time and was fast-tracked through the amateurs. Bam, bam, bam - fight after fight after fight. It was crazy. In the pros, I had 11 fights in one year. But I haven't missed a step. I'm still that same guy - but better, sharper and tightened up."

Martin will return to the ring on September 8 to face the undefeated, heavy-handed Polish slugger Adam Kownacki (17-0, 14 KO's) on the undercard of the welterweight world title main event featuring former world champions Shawn Porter and Danny Garcia, who will square off for the WBC title that was vacated in April by Keith Thurman.

Martin, though, says to expect a smarter boxer on fight night.

"I'm smarter now. I don't do the things that I used to do. I'm better at decision-making, I'm wiser, and I'm older. That's the key. Yes, I'd come back. There's good people [in the UK], absolutely. I don't have no regrets," he said.

Kownacki, 29, has won his last four bouts by KO, including a fourth-round stoppage over former world title challenger Artur Szpilka.