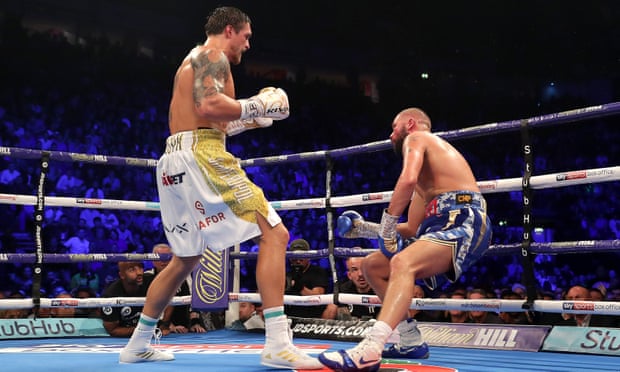 Undisputed WBA/WBC/IBF/WBO cruiserweight champion Oleksandr Usyk knocked out Tony Bellew in brutal fashion on Saturday night at the Manchester Arena in Manchester, England. A smart and ferocious Usyk fought a tactical bout for the first six rounds until he turned up the pressure.

Round one both fighters feeling things out. Action picked up by round three, and both men landed good shots. Bellew primarily throwing power punches off the counter and Usyk committed to his jab and keeping the range and timing Bellew. Usyk landed a right jab, then a ferocious looping left hook that sent Bellew straight to the canvas. The referee started the count, but Tony Bellew was not getting up. The judges’ scorecards were 67-67, and 67-66, 68-65 to Bellew leading up to the 8th round knockout.

“Manchester, I love you!” he says in English, praises Bellew’s fighting spirit and stays tight-lipped on the subject of future fights. “I want to spend some time with my family, it’s been a tough year.” - Oleksandr Usyk

Oleksandr Usyk defeated these 3 fighters in 2018:

All of them in their home countries. Oleksandr Usyk could be up for the 2018 Fighter of the Year.