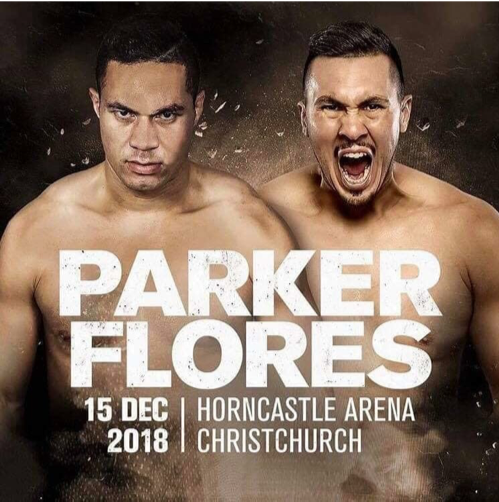 Flores’ lone loss as a professional came 3 ½ years ago against former world champion Charles Martin for the North American Boxing Association (NABF) crown. Flores, who took the fight with only two weeks’ notice, was stopped in the fourth round. An impressive victory against Parker, who has lost his last two fights against unified world champion Anthony Joshua and Dillian White, should propel Flores high in the competitive heavyweight division.

Parker has never been knocked out as a pro and he’ll be fighting at home for the first time in 1 ½ years. Parker, however, may be looking past Flores, according to his recent statements in the media. First, Parker called out Tony Bellew, who just lost to undisputed, undefeated world cruiserweight champion Oleksandr Usyk, and then the big New Zealander said he’d like to fight the winner of Whyte-Derek Chisora II.

Meanwhile, Flores is training like Rocky to make a major statement, one that promises to surprise a lot of boxing fans.

“There is no way this fight goes 10 rounds,” Flores said. “I’m going to knock him out. A lot of people might not have heard of Alexander ‘The Great’ Flores yet, but they’ll all know who I am after December 15th.”

“Alexander can dramatically change his life by defeating Parker and we’re confident he can go to New Zealand and pull off an upset,” said Keith Veltre, co-promoter of Roy Jones, Jr. Boxing. “Alexander has power in both hands and he will certainly test Parker’s chin. Flores isn’t going over there just for a paycheck, he’s going to send shockwaves throughout the boxing world.”

“I’m really glad that Alex is coming to New Zealand full of confidence,” remarked Parker, who is training in Las Vegas. “For me, boxing is all about the challenge, and this is another big one. I know what is at stake. I need to win and win well. I need to knock him out and I will knock him out, but I can’t focus on that. I need to focus on getting better each and every time I get in the ring.”