Manny Pacquiao vs. Floyd Mayweather 2: Will it Happen? 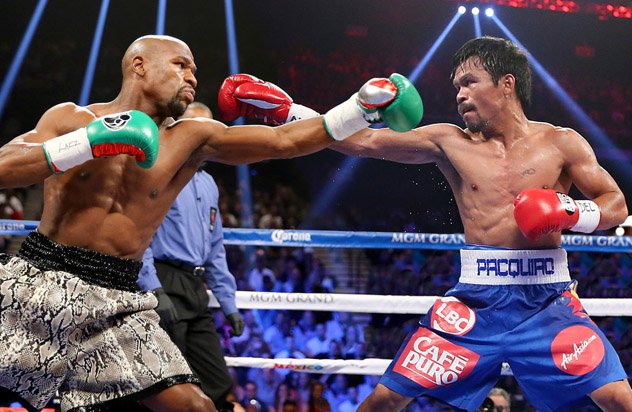 We all know how the famed fight between Manny Pacquiao and Floyd Mayweather Jr. went through. It was a huge dismay for the Filipino’s fans as everyone thought his speed would outmatch Mayweather’s escapist tactics.

Though Floyd was hailed victor, many weren’t satisfied with the fight, with some even saying that it was rigged. Hence, the people clamored for more — a rematch. So here we are, in the verge of the much-anticipated fight.

But will it happen? Well, the odds to that seem unlikely as this means having Floyd come out of retirement to face Pacquiao.

Mayweather managed to stifle through Pacquiao’s defense during their 2015 fight. Though the Filipino had the speed and power advantage, he failed to capitalize on it, perhaps due to the shoulder injury he sustained during training.

Pacquiao threw a minuscule 429 punches or an average of 35 punches per round. This was a record for Pacman because he threw in way more punches than that during his previous fights. Well, this perhaps might be due to Mayweather’s ability to dodge punches.

However, the chances of him duplicating his performance during his last fight against Pacquiao are highly unlikely. Mayweather hasn’t fought in a professional boxing match since defeating Conor McGregor last Aug. 2017.

Though he did fight Japanese boxer Tenshin Nasukawa, the match was still considered as an exhibition fight and wasn’t counted as one of his records. Nonetheless, he annihilated the 20-year-old in the first round.

It was a full-blast demolition of Nasukawa during the year-ender. In fact, experts even consider Mayweather’s last fight to be way back in Sept. 2015 against Andrew Berto.

Frankly speaking, it has been four years since Mayweather had been in a legit training camp. The level of inactivity his body is currently in is a huge factor to his upcoming possible fight. And it doesn’t matter if he’s got a rare talent, because an athlete as big as him can also show signs of wear especially that he’s already 40-years-old.

Manny is 40 as well. However, he’s been in an arguably fitter state knowing that he’s had a series of fights over the past two years. Count in Lucas Matthyse and Adrien Broner.

Also, it’s vital to take note that Pacquiao and his team will be having a closer second look at the Money Team. Long-time and former trainer Freddie Roch said in an interview that if a rematch between the two legends happens, then it would result to a very different conclusion.

Many sports analysts agree with him as they say that Pacquiao will win the rematch, even if it isn’t a knockout. A decision win is enough for him to cement his legacy, and that’s the likeliest outcome of the fight.

Pushing the pace is what he needs to do and without showing any signs of slowing down. Nonetheless, all these are, as of now, fantasy, and it’s likely that these speculations wouldn’t bear fruit.

However, the fight industry has changed a lot. Take for example the fight between Mayweather and McGregor. Many were led to believe that having a crossover fight between boxing and MMA was downright impossible. In fact, this even changed the tide of the betting game just like what happened with the raise of special betting offers such as bet365 bonus code and others.

But it still happened. Let alone the possibility of having a rematch between boxing’s biggest names? For sure, that’s more likely than a fight between two fighters coming from two different sports.

Sean Gibbons, well-renowned matchmaker, said in an interview that Manny should set aside any plans of fighting in May. That is unless if he fights Floyd Mayweather Jr. Gibbons also said that anything can happen and we have to wait what’s going to brew next week.

As of now, Pacquiao is waiting for any signs coming from Mayweather’s team. Perhaps, the Filipino celebrity just wants to hear the words directly from Floyd.

Gibbons continued saying that Manny is just waiting for confirmation from Floyd. Pacman already did everything to make the fight happen. However, it’s not a one-sided match because Mayweather also needs to do something to make it happen, Gibbons added.

Manny recently told Filipino media that he intends to fight this May or July. And if he wins the fight, then he’ll want to do another one a year after. However, it’s also worth noting that Pacquiao is running for senatorial re-election this coming May 13.

His tenure also won’t end until 2022. With this, it’s clear to say that he’s got his hands full. But then again, he’s Manny Pacquiao, and his love for boxing doesn’t show any signs of slowing down. So will a rematch between Floyd and Manny happen? We doubt so. Yet, there’s still a bit of hope that lurks around the corner.