Deontay Wilder and Rocky Marciano: Two very different people who are connected more than you think 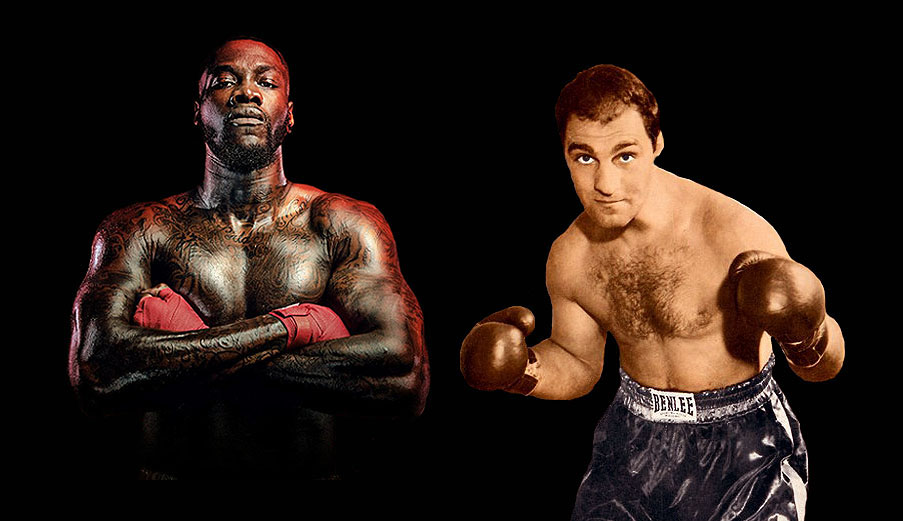 Unbeaten WBC heavyweight champion Deontay Wilder and the late Rocky Marciano do not look like in any way, but they actually have more in common than one would believe.

In March 1943, Marciano was drafted into the United States Army, where he spent two years honorably serving the United States. Stationed in Swansea, Wales, the future heavyweight champion of the world helped ferry supplies across the English Channel to Normandy. After the end of World War II, Marciano completed his service in March 1946 at Fort Lewis, Washington. At the age of 22, Marciano and his best friend Allie Columbo faced the question that many people face at this time in their lives, “What’s next?”

Best friends at an early age, Columbo knew more about Rocky than the future legend may have known about himself. Marciano was a phenomenal athlete during his youth and seemed like he was on a path to become a professional baseball player. However, Columbo persuaded the young Marciano to give up baseball and pursue a career as a professional boxer. And boy, what a decision that was.

Marciano hired Columbo as his trainer, and the duo started to compete in amateur tournaments in New England, and Rocky, like Wilder, was not a great boxer by any means, but like Wilder, he had one trait that put him in a league of his own – supreme punching power. In his last amateur fight, Marciano outpointed George McInnis to win the New England AAU heavyweight title on March 22, 1948. However, Rocky did not move on to the nationals because he fractured his thumb after punching a bird with a very rugged head. As a result, Rocky lost his job at the shoe factory and was forced to make up his mind – either give up boxing or the shoe factory. With an amateur record of 9-4 with seven knockouts, Rocky chose to fight on.

Wilder was a waiter at IHOP making around $70 a day in tips and then $400 a week working in a Red Lobster kitchen. The 6-foot-7 Wilder was forced to drop out of school to earn money to take care of his ill daughter, who was born with spina bifida, a congenital disability that occurs when the spine and spinal cord do not form properly. Then, Wilder opted to take the biggest risk of his life, train to become a professional boxer, so he and his daughter would never have to worry about living paycheck to paycheck again. Wilder, then 20, entered the Skyy Boxing Gym in Northport, Alabama, where he met Jay Deas. Just two years later, Wilder won both the National Golden Gloves and the U.S. championships at 201 lbs. In 2008, he made it to the Olympic team and eventually earned a bronze medal. After accumulating an amateur record of 30-5, Wilder turned pro.

In 1950, when Marciano was 27 years old, boxing pundits started to talk about this Marciano kid, but many cast him to the side. “He’s one-dimensional.” “The only thing he can count on is power, nothing else.” “He hasn’t fought anyone!” Rocky had heard it all. In fact, in boxing circles today, we still hear people talk about resumes. In Rocky’s case, the pundits were right to an extent. By 1950, Marciano had only beaten two opponents of note, Roland La Starza in a razor-thin split decision and Ted Lowry, who went the distance with Rocky twice, and probably should have won their first encounter. (Yes, those judges have been an issue for a long time, friends).

Wilder has faced the same criticism throughout his career “41 fights, and he has only faced one really good fighter.” “His resume is padded with bums.” “He gets outboxed easily.” “The only thing he can do is punch. He can’t block for s***.” But ultimately, Marciano never lost officially, and neither has Wilder. Yes, I thought Tyson Fury beat him in the first fight by a score of 114-112, and I stand by my score, but we can all agree that Wilder’s punching power was the determining factor of that fight, no?

To summarize, Wilder, as Marciano did, can equalize – or cancel out with one mighty blow – the advantage in points accumulated by a more skillful opponent. We have seen Wilder do that with the likes of Gerald Washington, Luis Ortiz, Tyson Fury, and Artur Szpilka. Sure, the heavyweight division today compared of that to the Marciano era is weaker, there’s no question about that. However, Wilder deserves his credit.

On October 26, 1951, Marciano scored an eighth-round knockout of Joe Louis, but there was a trace of intellection in the way he won that fight. In the buildup to the fight, Rocky’s right hand received all the advance publicity. During the bout, he threw it often and missed – a lot. On the other hand, that also meant Louis may have been paying less and less attention to the left. He was.

In the eighth, Marciano caught Louis with three left hooks and an almost redundant right. Fight over. On September 23, 1952, after going 42-0 with 37 knockouts, Rocky got his first heavyweight title shot against Jersey Joe Walcott. The beginning of the fight was very rocky, indeed for the challenger.

Walcott was clipping Marciano and moving him back. A beautiful left hook dropped him in the second round and Rocky, with a combination of indignation and inexperience, jumped up at three seconds. Besides, it was the first time that Marciano had ever been down in his professional career. Walcott, who could not believe what he was seeing, thought this was his chance to KO the upstart, but the bell rung to signal the end of the round.

Adversity. Every fighter has experienced it. Floyd Mayweather, Tommy Hearns, Wilder when he fought Luis Ortiz – it has happened to every legend of this sport. Rocky was no exception. In the 12th round, it appeared Walcott was on his way to a decision, as Marciano swung wildly and missing by absurd dimensions. But as the saying goes, “One punch changed it all.” With Walcott against the ropes, looking for a place to counter, Rocky knocked Walcott out with a punch he was not supposed to know how to do – a perfect one-two combination – a right cross and a follow-up left hook for insurance. Although he failed to score a knockout, Wilder made a drastic comeback in the 12th round against Tyson Fury that set up an incredible finish.

Fury appeared to have enough in the bank to score a win on points, but he wanted to finish with an exclamation point. The undefeated lineal heavyweight champion scored with a right cross to Wilder’s jaw, but Wilder caught him with a solid right hand. Fury was on his way to the deck already from the right, but a thunderous left hook clipped him in the process. And just like that, Fury was on top of the world and staring at the ceiling in a heap.

Wilder is a disconcerting opponent for any good boxer because, like Marciano, his awkwardness is inconsistent; every now and then, he does something highly-skilled, and what no one expects of him. For example, the one-two combination he landed on Dominic Breazeale to score that electrifying first-round knockout in May. It was more than just the right hand. It was the jab, the feet placement, and the execution. As A.J. Liebling would have put it, it was “a model of pugilistic concision.”