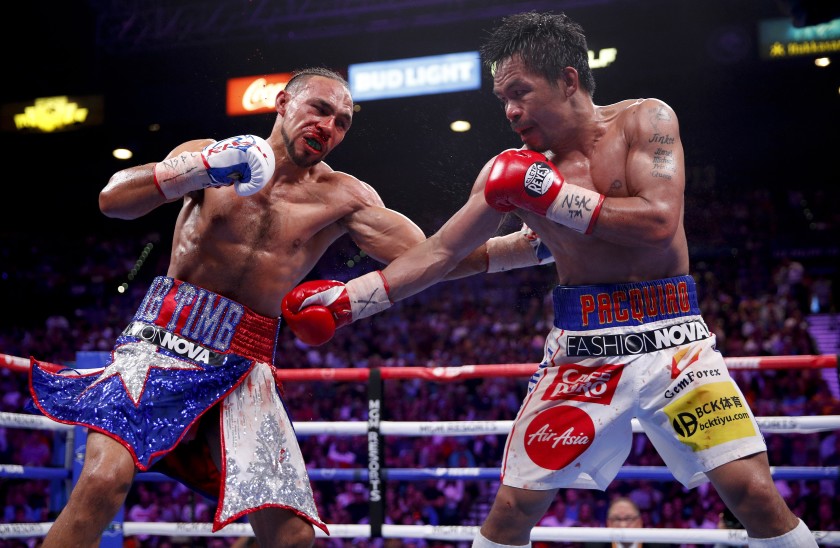 LAS VEGAS -- Keith Thurman talked the smack, but Manny Pacquiao accomplished what he has done for decades, utilizing his tiny fists to do the talking.

The all-time boxing legend wrested the WBA "super" welterweight title from previously unbeaten titleholder Keith Thurman with a split-decision victory on Saturday before a sellout crowd of 14,356 at MGM Grand Garden Arena in Las Vegas on FOX Pay-Per-View.

With his second victory on the year, Pacquiao became the oldest welterweight in the history of boxing to win a major title.

"It was fun," Pacquiao said. "My opponent is a good fighter and boxer. He was strong. I'm not that kind of boxer who talks a lot; we were just promoting the fight. I think he did his best, and I did my best. I think we made the fans happy tonight because it was a good fight.

"I really love the fans. Thank you so much for coming here and witnessing the fight. I'm sure they were happy tonight because they saw a good fight. Even though Thurman lost, he did his best. He's not an easy opponent. He's a good boxer, and he's strong. I was just blessed tonight.

"I think (I will fight again) next year. I will go back to the Philippines and work and then make a decision.

"I hope to be at that (Errol Spence- Shawn Porter unification) fight on Sept. 28."

In the first round, Pacquiao sent the partisan crowd into a frenzy when he slammed Thurman with a right hook to the head, and Thurman dropped like flour out of a chute. It was just the second time that Thurman had been dropped in his professional career.

"He is a fast fighter and smaller fighters normal throw volume punches," said Thurman. "He really does have that hand speed. He jumps in and out with that quickness.

Pacquiao was relentless again in the second round, forcing the decade-younger Thurman backward.

In the third round, Pacquiao, boxing's only eight-division world champion, nailed Thurman with a lead right to the face. Thurman performed better in the round, though, as he was able to land some body punches.

Thurman doubled up on the body attack in the fourth round, as he pinned Pacquiao against the ropes. But Pacquiao slipped out of danger and took control of the center of the ring.

Halfway through the fifth round, Pacquiao drew blood on Thurman's nose with a hard jab and opened up a cut below Thurman's right eye later in the round.

At the end of the fifth round, Thurman's face was a mess, and his body mangled. He stumbled his way to the corner with his head down but came out in the sixth round looking to mount a comeback.

Thurman got off to a good start in the sixth round as he got Pacquiao's attention with a good straight right.

In the seventh round, Thurman was more aggressive, and it worked in his favor. He knocked Pacquiao back with a hard one-two combination, a straight right to the face, followed by a left hook.

The eighth was a close round, but Thurman edged it as he clipped Pacquiao coming in with a couple overhand rights.

Before the start of the ninth, Thurman seemed to be closing in on Pacquiao. It turned out to be his best round of the night. He landed 26 punches on Pacquiao and was in complete control, connecting with hard shots to the body throughout the round.

But Thurman's progress hit a wall in the 10th. Pacquiao badly hurt Thurman with a straight left to the body and had "One Time" on his bicycle. Body shots have always been an Achilles heel for Thurman and Pacquiao's shot was no exception. At one point, Thurman took his mouthpiece out to try and get some air back into his lungs.

In the 11th round, Pacquiao stalked Thurman but may have done a little too much stalking. Thurman squared up Pacquiao and caught him with a straight right hand. However, Pacquiao got away from the ropes and roughed up Thurman some more.

In the final round, Pacquiao and Thurman took turns in whacking each other with straight shots. But in the end, Manny Pacquiao turned back the clock again and treated the fans to yet another classic world title bout.