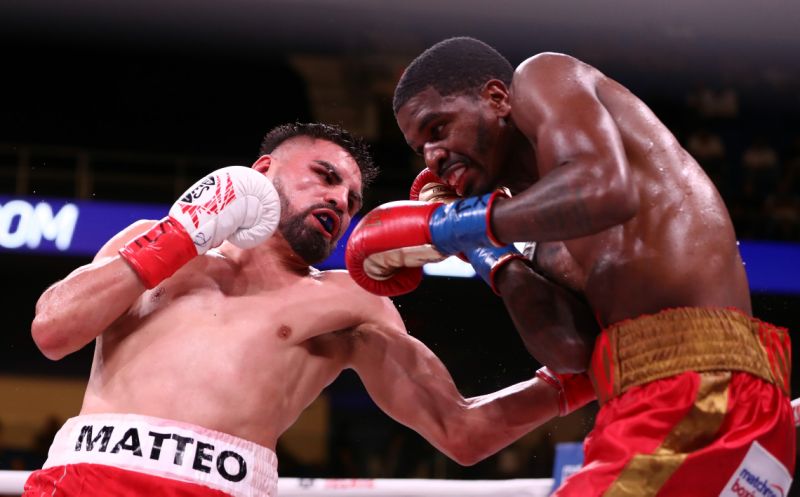 In a high-action fight that blew nearly everyone’s expectations, Ramirez (25-0, 17 KO’s) stopped Maurice Hooker in the sixth round with an onslaught of heavy blows to unify two 140-pound world titles at the College Park Center on the campus of the University of Texas at Arlington.

Both fighters entered the ring as unbeaten world champions, but barring a draw, someone was going to exit the ring without their undefeated record and their belt.

Midway through the opening round, Ramirez was credited with a knockdown of Hooker. However, replays showed that Ramirez stepped on Hooker’s foot, which caused him to lose his balance.

“The first knockdown didn’t affect me,” Hooker said. “I just knew I had to come back and use my jab. When he had me on the ropes, he didn’t really catch me with anything. I was blocking everything.”

Hooker used his jab effectively at the beginning of the second round, but Ramirez responded by cutting the ring off and connected with several shots to the body.

Hooker had a solid third round again by utilizing his jab, but he also found success with his combinations. Hooker was able to counter Ramirez with left hooks to the head, followed by rights to the head.

“He landed good shots, but they were on my forehead, not the right placement,” said Ramirez. “But he didn’t land his best right hand. I had to be very careful in there.”

Both fighters shined in a hellacious fifth round and had nearly every fan out of their seats. Ramirez targeted the body, but Hooker landed with counter left hooks to the head again. At the end of the round, it was Hooker who landed the more effective punches, both to the head and the body.

It call came to an end in the sixth when Ramirez caught Hooker with a brutal left hook that landed flush. The shot sent Hooker reeling into the ropes, and Ramirez’s killer instinct kicked in. He landed blow after blow, including left hooks and right hands directly on the chin. In all, Ramirez connected with nine unanswered punches. With Hooker out on his feet, referee Mark Nelson halted the action at one minute, 48 seconds.

“I went back to my fundamentals,” said Ramirez, of Avenal, California. “Working my jab, and I was closing the distance. Then when I got in range, I gave him that one-two jab that just works so well for me.”

With half of the four major belts in the 140 lb. weight class, Ramirez will wait for the winner of the World Boxing Super Series (WBSS) final. Regis Prograis (24-0, 20 KOs) and Josh Taylor (15-0, 12 KOs) are due to meet to unify the other two belts on Oct. 6 in the United Kingdom.

Hooker (26-1-3, 17 KO’s), of Dallas, who was defending his world title for the first time in front of his hometown fans, took his loss with class.

“I just lost focus for a quick second,” Hooker said. “I was playing around with my jab hand, and I lost focus. That just shows you, one second with a top fighter can change everything.”

Hooker, who has had trouble making 140 pounds, is not sure if he will fight again as a junior welterweight.

“I’ll have to sit down and discuss that with my team,” said Hooker.