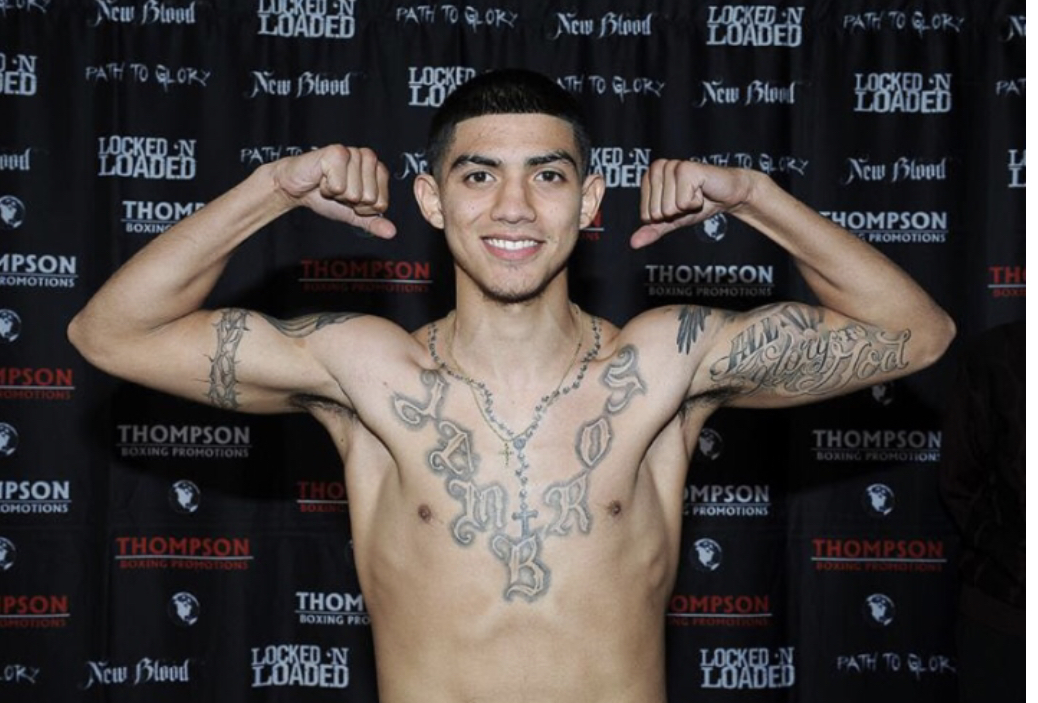 Undefeated lightweight prospect Michael Dutchover returns to ShoBox: The New Generation seeking to make a statement win in his homecoming fight against Thomas Mattice in the 10-round main event of a three-fight telecast on Friday, September 20 live on SHOWTIME (10:30 p.m. ET/PT) from La Hacienda Event Center in Midland, Texas.

The fast-rising Texan prospect Dutchover (13-0, 10 KOs) returns for his second consecutive test on ShoBox after making an impressive debut in May with a first-round knockout. The 21-year-old prospect will face his toughest test to date in ShoBox veteran Mattice (14-1-1, 10 KOs), a fearless five-year pro that has displayed promising boxing skills in previous appearances on the developmental prospect series.

In a battle of undefeated featherweight prospects, two-time Junior Olympic National Champion and two-time Golden Gloves Champion Ruben Villa (16-0, 5 KOs) will face Garcia Promotions’ most coveted prospect, Mexico’s Enrique Vivas (17-0, 9 KOs) in a 10-round matchup. In the opening bout, undefeated welterweight prospect Brandun Lee (14-0, 12 KOs) will face an opponent yet to be named.

Tickets for the event, which is promoted by Banner Promotions and Thompson Boxing in association with GH3 Promotions, Garcia Promotions and Now Boxing Promotions, are priced at $120, $100 and $80 and can be purchased online at www.haciendamidland,com or by calling 432-563-3737.

“We were able to put together one of the best ShoBox cards we’ve seen so far this year thanks to the collective efforts of five promoters that didn’t shy away from matching their prospects tough,” said Gordon Hall, Executive Producer of ShoBox: The New Generation. “We get to see unbeaten Michael Dutchover making his hometown debut in a step-up fight against the talented Thomas Mattice, a match of unbeaten prospects in Villa vs. Vivas and the series debut of a top prospect and former amateur standout Brandun Lee. September 20, is without any doubt, the classic example of what ShoBox is all about.”

“We are excited to once again be able to showcase Michael Dutchover and Ruben Villa on ShoBox,” said Artie Pelullo, President and CEO, Banner Promotions. “It will be a great experience for Michael to fight at home and continue his ascension up the ranks. Ruben is ranked very high, so we expect a great performance as he continues to position himself for a world title.”

“In a lot of ways this is a coming out party for Michael, but anyone that has followed his career knows he boasts world championship talent and has the dedication to get to the top,” said Ken Thompson, President of Thompson Boxing. “Also on the card is Ruben, another supremely talented youngster that will also be in the mix for a world title shot in the near term. Boxing fans who tune in on SHOWTIME are going to see two incredible talents.”

Dutchover, of Santa Fe Springs, Calif. by way of Midland, Texas, started boxing at the age of eight, compiling a notable amateur record of 130-17. He was a runner-up at the 2016 National Golden Gloves and a Bronze Medalist in the 2016 Olympic qualifiers, turning pro shortly afterwards. Dutchover, who boasts a 77 percent KO ratio, has knocked out his last five opponents including durable prospect Rosekie Cristobal in his last outing in just 109 seconds.

Dutchover will wear former NFL running back and legendary Texas Longhorn player Cedric Benson’s jersey to the ring on fight night. Benson, who also played football for the renowned Robert E. Lee High School in Midland, was fatally injured in a motorcycle accident on August 17.

“Mattice is a talented fighter, he will bring out the best in me,” said Dutchover, who is excited to headline in his hometown. “Fighting at home means everything to me. I have fought mostly in California and on the East Coast. This homecoming is overdue. Like Friday Night Lights, I will be the next big thing from Midland, Texas. I will have my teachers, coaches and classmates there on fight night. I am ready for a big outing.”

Mattice, who is making his fifth start on the series, is looking to rebound after last minute opponent, Will Madera, handed him his first defeat in his last ShoBox appearance. Hailing from Cleveland, Ohio, the 28-year-old lightweight fought to a split-draw in an immediate rematch with Zhora Hamazaryan in September 2018 after winning a controversial split-decision in their first bout. Prior to his back-to-back fights with Hamazaryan, Mattice had won six consecutive bouts via knockout. He scored a decision over Angel Sarinana in his last start in May.

“I am focused and confident,” said Mattice. “I haven’t watched much on my opponent. I let my team watch and develop the best possible game plan. I know he is a durable guy but I’m coming to win. This is my fifth ShoBox appearance and I feel that shows people recognize my talent and hard work.”

“Since day one Thomas Mattice has put his character on the line letting everyone know he doesn't duck anyone,” said Mattice’s promoter Vito Mielnicki, President of GH3 Promotions. “It's a crossroads fight for both fighters; Mike [Dutchover] is young and hungry and has never been in a top-level fight but has the pedigree, and Thomas has been tested and proven he belongs. It’s going to be the fight of the night. I predict Thomas will win by KO.”

The 22-year-old Villa of Salinas, Calif., returns for his third consecutive test on ShoBox after scoring a unanimous decision over Luis Alberto Lopez in May and outclassing then-unbeaten Ruben Cervera in January. Villa, who started boxing at the age of five, owns victories over Shakur Stevenson, Devin Haney and Gary Antonio Russell as an amateur (166-17). He turned pro in 2016 and is considered by many a prospect to watch. He hopes to continue his rapid ascension in the featherweight ranks with an exceptional showing against the undefeated Vivas.

“I am looking forward to performing in front of the fans in Texas,” said Villa, “I sparred with Enrique Vivas in the past, he’s an aggressive fighter. My team and I put together a good game plan and I’m going to follow it. I think a win here will position me a step closer to a title shot. I hope to be in a title eliminator or championship fight within the next 12-to-18 months. I have my eye on the vacant WBO belt.”

Vivas of Texcoco, Mexico, is coming off a unanimous decision victory over Jose Estrella in his United States debut in June. He started training in martial arts and kickboxing from an early age, turning to the sweet science at 17, after a motorcycle accident. As an amateur, he won national, regional and state championships, amassing a 93-7 record. He turned pro in late 2014 and has stayed very active, fighting three-to-five times per year. Nicknamed “El Ejecutor” (The Executioner) for his devastating combinations, the 25-year-old has built his undefeated record against limited opposition and a victory over a gifted prospect like Villa can catapult his rise through the ranks.

“I am very happy I got this opportunity,” said Vivas, who is making his television debut on September 20. “Ruben Villa is a very strong southpaw with a lot of experience. He is one of the best featherweights out there. I’m up for the challenge. All of the struggles I have been through in my life have led me here, to this fight. When I fight, I let it all out. It will be a very exciting fight. Don’t miss it.”

“I'm very excited for Vivas’ debut on ShoBox,” said four-division champion Mikey Garcia, who is the President of Garcia Promotions. “This is a 50-50 fight. When we agreed to this matchup, we made the decision with a premise in mind that we firmly believe in: We fight the best to be the best. That is and will continue to be the foundation of Garcia Promotions.”

Super lightweight prospect Lee, of Coachella, Calif., turned pro at 17 after a stellar amateur run (196-5). He has sparred with Mikey Garcia, Devin Haney and Mauricio Herrera. Trained by his father Bobby, the 20-year-old has built up an 86-percent knockout ratio. A very active fighter, he has fought Pablo Martinez and Jorge Munguia. A definitive win on his TV debut would help put his name on the map.

“I am very excited and grateful for this opportunity to fight on national television,” said Lee. “I am young and any good performance will boost my career in a positive way, whether it is a knockout or decision. I am a boxer-puncher and I can adapt to anything in the ring. I am looking forward to showcasing my skills on national television.”

“I can’t describe how excited I am about Brandun Lee,” said Now Boxing Promotions’ Cameron Dunkin, Lee’s promoter. “He was 196-5 as an amateur and won 16 National Championships. He is truly gifted and very talented. He’s of Korean heritage and his fan base is huge. They really support him. He has an amazing future.”