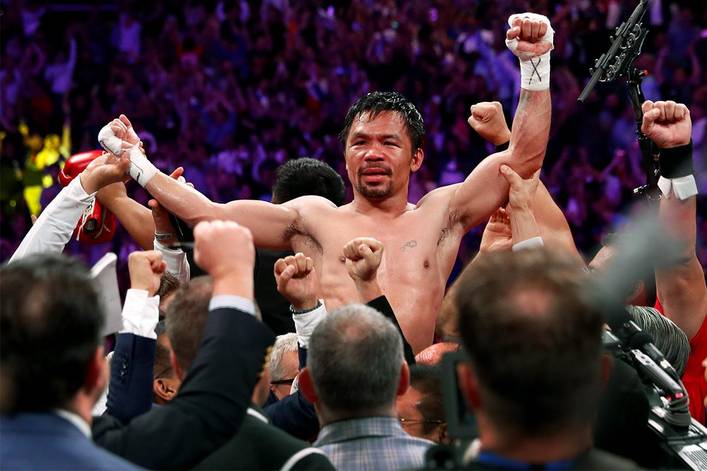 If Bob Arum were Manny Pacquiao, he would strongly consider retirement.

On July 20, Pacquiao became the oldest welterweight world champion in the history of boxing after beating previously unbeaten Keith Thurman to win the WBA "Super" title.

Although Arum was impressed by Pacquiao's performance, he also believes the 40-year-old took too many punches and is worried about his future health.

"He looked very good in that fight, but if you watched that fight, he took a lot of punches," Arum said. "He's over 40, and he's got to watch out. He can't take that kind of punishment at that age and wind up like God forbid Muhammad Ali."

It is widely believed that the punishment Ali sustained during his storied boxing career caused his Parkinson's disease. A study released in 2017 showed that the late heavyweight champion showed signs of the disease years before his diagnosis.

Ali was diagnosed with Parkinson's in 1984, three years after his final retirement.

If IBF champion Errol Spence defeats Shawn Porter in their world title unification fight September 28 at Staples Center in Los Angeles, a Pacquiao-Spence fight could become a realistic possibility. However, do not count Arum as a fan of the idea.

Despite multiple calls for a rematch, Mayweather, for the time being, seems content in retirement. Perhaps Pacquiao should consider doing the same.