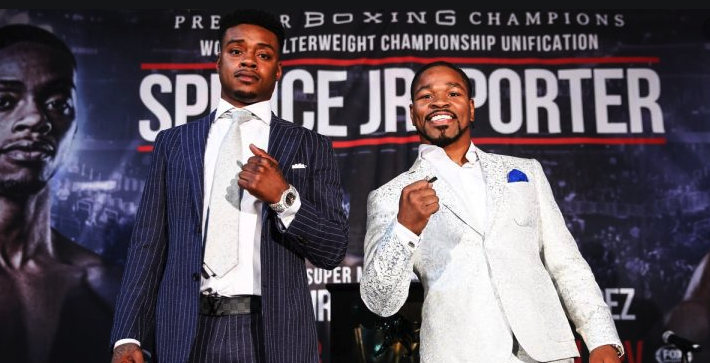 Staples Center in Los Angeles is the venue for the world welterweight championship clash between Errol Spence Jr. and Shawn Porter. The match is booked for 28th September and the winner has the chance to unify the titles.

Errol “The Truth” Spence Jr. is the owner of IBF title, while “Showtime” Shawn Porter is the WBC Champion. These two fighters are the best in this weight category, and this is going to be very tight clash. It is very likely that the winner f this match will face WBC mandatory Ugas next, but that is still not defined. In the build-up of this bout, Errol Spence Jr. is still undefeated in his professional career, while Shawn Porter lost twice.

If we take a look to the odds, the bookmakers think that Spence Jr. is a clear favourite. However, we shouldn’t ignore the fact that Porter is solid boxer and his chances are a bit underestimated for this clash. Since the fight was announced in April earlier this year, the odds rapidly changed in Spence’s favour. Although the majority of pundits and boxers back Spencer Jr. to win, this is still a fight between two champions, and it is going to be a tight one. If you want to test your luck with some boxing related slots, take a look at Casino Biggest Bonus to get the best possible deals.

Spence Jr. is considered as the best in his weight class, however there are also people which prefer Terence Crawford. The fight between these two would be a spectacular event, but in order to get into position of challenging Crawford, Spence Jr. needs to get past Porter first. Although Porter has broader experience, Spence Jr. is in a very good momentum. One thing is for sure, these two guys are going to give their maximum as they come to fight.

If we talk about each fighter’s characteristics, Spence is a gifted technician and he differs from the rest of the fighters in his category by his power and size. He booked his biggest win over Mikey Garcia earlier this March, while one of the notable wins is the one against Carlos Ocampo in the match which ended by knockout. However, many of experts consider that Porter is the toughest challenge for Spence Jr. so far and he can cause a lot of troubles. Although he is still unbeaten in his pro career, it might be the case that Spence Jr. hasn’t been pushed yet. On the other hand, he is still gifted fighter and his potential is not questionable.

Shawn Porter suffered two defeats in his career – in bouts against Keith Thurman and Kell Brook. However, he lost both bouts by way of the judges’ scores. Porter managed to beat current WBC mandatory Yordenis Ugas in his last outing which brought him the title. He also managed to beat Danny Garcia, former WBC champion by unanimous judges’ decision. In the past couple of bouts, Porter showed a very good form by beating some of very talented welterweight boxers. Therefore, it is pretty surprising that he is underestimated so much, and he definitely has some chances in this bout although Spence Jr. is considered as strong favourite.

So far, Spence Jr. has defended his title successfully three times, and from the total of 25 bouts and wins, he booked 21 wins by knockout. On the other hand, Porter won 30 times in total and 17 times by knockout. This is what both fighters said in the build-up for this match:

“It’s going to be a very exciting fight,” said Spence. “Shawn is never in a boring fight and I always entertain. It will be a ‘Fight of the Year’ type fight because our styles mesh. Shawn Porter is a guy who tries to rough you up. That’s what he’s always done. With Yordenis Ugas he tried to box, and he said he didn’t like that style. He said he is going back to his original style. If he brings that style to me, it’s going to be a great fight because I’m going to bring it right back to him.”

“There haven’t been too many fights as a professional that I’ve been this excited about,” said Porter. “I was really excited about the Danny Garcia fight and I’m really excited about this one. Ever since Spence got a belt, I really circled this fight on my calendar. Preparation is the key. I think I have everything it takes to beat Errol Spence. I’m very confident and my team is confident in what I have to do on September 28. We’ll be ready.”

Definitely, this is going to be one of the most exciting bouts of the year in which the winner cannot be predicted clearly. This one is make or break for Spencer Jr. and although Porter is capable of providing an upset, we believe Spence Jr. is going to come out as the winner from this bout.