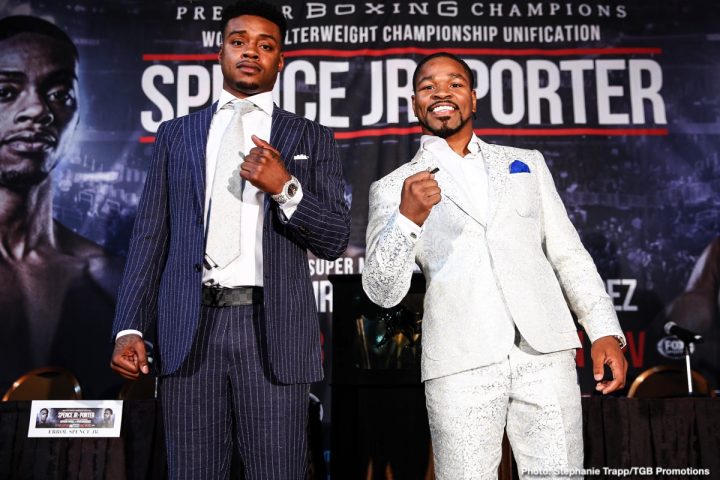 Porter (30-2-1, 17 KO's) is in his second reign as welterweight champion after narrowly outpointing Danny Garcia in September to claim a vacant title. He is an intense pressure fighter and is most successful on the inside. Porter likes to goad his opponents to come to him. However, he did not necessarily need to rely on his signature pressure style to defeat Garcia a year ago. He can box. However, a majority of ringside observers felt that he clearly lost to Yordenis Ugas in March. Expect Porter to be in the fight.

Meanwhile for the 29-year-old Spence (25-0, 21 KO's), he is a southpaw with an excellent jab and behind that jab is world-class boxing skills, including hand speed, angles, punch accuracy, and ring IQ. Spence’s defense is also highly technical, and allows him to counter effectively. He looked absolutely brilliant in March with a one-sided drubbing of previously unbeaten four-division world champ Mikey Garcia.

Brook has made three defenses of his IBF world title since knocking out Kell Brook in the 11th round of their championship fight in England in May 2017. He has defeated the likes of Lamont Peterson, Carlos Ocampo, and Garcia.

Spence will also hold advantages of roughly two inches in height and three inches in reach over Porter. However, both fighters carry themselves with a similar level of poise as they meticulously break down their opponents.

This is going to be a nip and tuck fight for at least the first half. Spence will have his moments and so will Porter. However, the true test will come in the middle rounds once Spence is able to set up and land his left hand, and he will. However, it is a matter of when he will land it and where. If Porter can get to Spence's body early in the fight, it could allow him to build an early lead. If Spence boxes well to start, the cards could swing in the Texan's favor.

I see a fun fight with Spence dropping Porter late in the 11th. However, Porter will get up and survive a one-sided 12th round to go the distance.