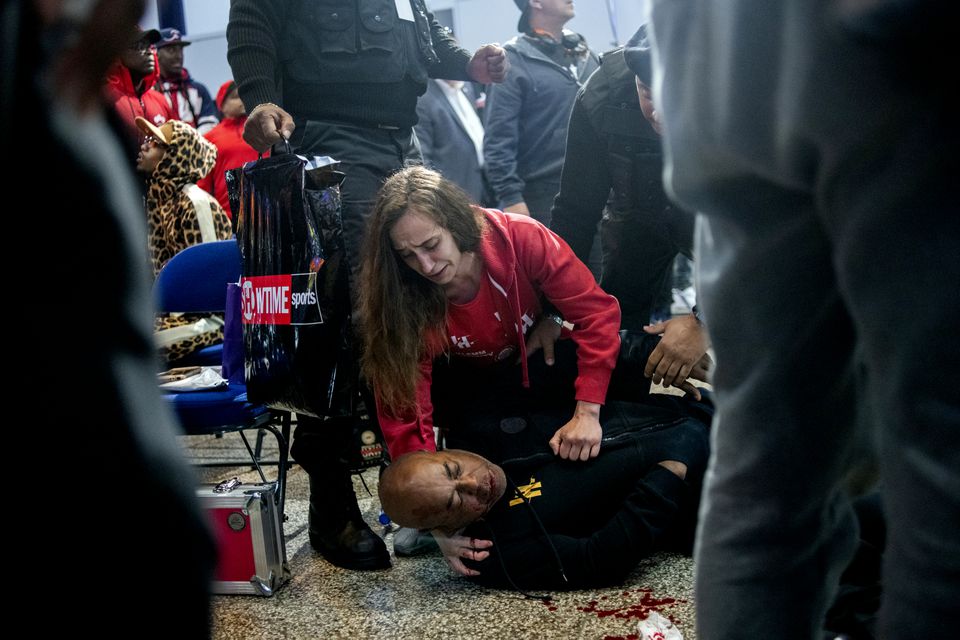 The Claressa Shields-Ivana Habazin junior middleweight world title fight could be in jeopardy after a melee erupted Friday afternoon prior to the weigh-in for the bout.

It ended with Bashir Ali, Habazin's trainer, getting sucker-punched by a man who immediately fled from the lobby of the Dort Federal Event Center.

According to USA Today, the suspect has been arrested.

Video obtained by FightNights.com showed Ali bleeding from his head after he hit the concrete floor. He was transported out of the arena on a stretcher to McLaren Medical Center for further evaluation.

His condition was not immediately known.

"Right now, I am on my way to the hospital to visit Ivana Habazin and her team and her trainer," Mark Taffet, Shields' manager, told MLive. "I want to make sure they're OK.

“We want to make sure they get the best proper treatment, and it’s unfair to assess or address anything until we make sure first that her trainer is fine and that’s she’s calm and comfortable. After that, we will the address the situation.”

When asked if the fight could be postponed, Taffet said it was not appropriate to have that discussion at this time.

“Right now, her focus and our focus is on making sure her trainer is well attended to at the local hospital and then if he’s OK and everything is OK, we’ll have a discussion with her, and we’ll reconvene the weigh-in later today with Clarissa and Ivana.”

If a second weigh-in does take place, it will not be open to the public or the media.

Habazin, who was on the ground sobbing as her trainer was being treated on the floor of the lobby, accompanied Ali to the hospital, and did not return to the arena.

However, the fight was not the first thing on her mind after the calamity at the weigh-in.

“Nothing is canceled from what we know,” Shields, a two-time Olympic gold medalist, told reporters. “I don’t condone stuff like that. It’s unfortunate it happened here.”