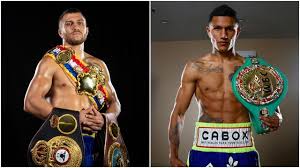 Junior lightweight world titleholder Miguel Berchelt will defend his crown against American contender Jason Sosa on Nov. 2 Dignity Health Sports Park in Carson, California, but he already has his eyes set on his future.

Berchelt (36-1, 32 KO’s), 27, of Mexico, knocked out Francisco Vargas in January 2017 to claim the WBC title and has made five defenses, defeating the likes of Takashi Miura, Maxwell Awuku, Jonathan Barros, Miguel Roman, and Vargas (in their rematch).

Berchelt is expecting to knockout Sosa.

” I think it will be an excellent fight, Jason Sosa is an excellent boxer, but I think I will have the power to knock him out for 10 seconds,” Berchelt said.

Some fans have been clamoring for Berchelt to unify ever since winning the belt, but the Mexican has no plans to do so, which has angered fellow 130-pound belt holder Jamel Herring, among others.

”Well people want many things, but sometimes we can’t have everything in life. I would love to fight the best, as long as the money is good. I have the WBC belt, which I think is the best in boxing. The truth is, the belt I have has always been the one people want and the greatest; I am not interested in (another) title, but if it’s good money, then I would fight them.

Berchelt never explicitly said that he was willing to fight Herring, but hinted that money was the issue.

” I was never offered a fight with him [Herring]. I would fight anyone for the right money.”

The fight that Berchelt is targeting for next year is a scrap against unified lightweight world titlist Vasily Lomachenko. The former dual Olympic gold medalist has gone 4-0 with two knockouts since moving up to 135 pounds in May 2018 and is aiming to become the undisputed champion in 2020.

” I would like to fight with [Vasiliy] Lomachenko. He’s a very good fighter, but I feel I have the power to beat him and even knock him out.”