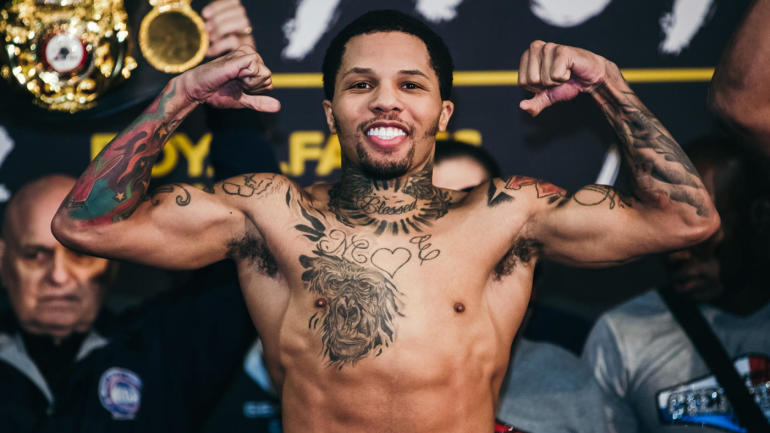 Gervonta Davis, who vacated his junior lightweight world title in September, is moving up in an attempt to win a world title in another weight class.

The fight between Davis and Gamboa has been in the works since last year. FightNights.com learned at the Canelo Alvarez-Daniel Jacobs middleweight world title unification in May that the teams of Davis and Gamboa were talking about fighting last July. However, Davis ended up facing Ricardo Nunez in a homecoming fight in Baltimore, where the explosive 26-year-old phenom scored a second-round knockout. Gamboa knocked out former 130-pound world titlist Roman "Rocky" Martinez in the second round of the chief support of that card.

"We're looking forward to lighting up the city of Atlanta with a spectacle headlined by the most exciting fighter in boxing, Gervonta Davis, taking on a seasoned and fearless warrior, Yuriorkis Gamboa," Mayweather Promotions CEO Leonard Ellerbe said. "Gervonta spends a lot of time in Atlanta, and he wanted to bring his talents to his second home, where he plans to put on yet another electrifying performance.

Davis (22-0, 21 KOs), a 24-year-old southpaw, lost his first belt on the scale in August 2017 after failing to make weight on the undercard of the Floyd Mayweather-Conor McGregor super fight.

As a result, he has been subject to criticism for not taking the sport seriously enough. However, Davis has learned over time to cast the haters aside, and focus on what he is being paid to do -- put fans in seats and punch guys in the face.

"I'm excited to head south for the holiday season and put on a great show for the city of Atlanta on Dec. 28," Davis said. "It's been a long time since a boxing fight of this magnitude has come to the city, and I'm proud to be able to give lots of excitement to a city where I've spent a lot of my time.

"Some of the greatest boxers in the Hall of Fame have won titles in multiple weight divisions, and I'm no different. I expect as much success at 135 pounds as I had at 130 pounds. Yuriorkis Gamboa is a respected name in boxing and has achieved high levels of success in both the Olympics and as a professional. I expect him to bring out the best in me, and l will be ready for it."

"I am blessed to have this amazing opportunity to become world champion once again," said Gamboa, who held a featherweight title from 2009 to 2011. "I have been hoping that this opportunity would be against Gervonta Davis, as well. I love and embrace the role of underdog that I have in this match because it will be the ultimate motivator. For the first time in my career, I will be involved in a high-profile bout in which I am not coming in at a disadvantage.

"Gervonta is an excellent fighter, but he has yet to face anyone like me. All the sacrifices I have made in my career and my life -- leaving Cuba and coming to this country to find a better life for my family -- will finally pay off on Dec. 28."

Since the win, Pascal has been elevated to "regular" world champion, and will make his first defense against Jack, who lost the same belt in January to Browne.

"After I took this belt from Marcus Browne, I asked my team to get me back in the ring before the end of the year, and they delivered," Pascal said. "This is going to be a fight you don't want to miss. Everybody knows I come to fight. I'm a warrior, and it's the same thing for Badou. We both have proven to be boxers that want to fight the best in the world. Now we're fighting each other, so you know it's going to be fireworks."

Jack (22-2-3, 13 KOs), 35, a Sweden native fighting out of Las Vegas, a former two-division world champion, is fighting for the first time since losing to Browne. During that fight, he suffered one of the worst cuts in the modern memory of boxing. Jack was hampered by a vertical gash in the center of his forehead after an accidental head-butt in the seventh round. The cut bled exuberantly until the end of the fight, which required around 100 stitches to close the wound.

Nine months removed from that horrifying experience, Jack is grateful to still have a chance to put on a show for the fans.

"It feels great to be back, and I'm looking forward to putting on another exciting performance," Jack said. "I always fight to make sure my family lives a comfortable lifestyle and to secure my legacy, but I'm just as motivated to represent and fight for children across the globe that my foundation helps.

"Expect to see me stronger, smarter and more experienced on Dec. 28. I'm looking forward to getting my belts back and becoming a three-time world champion. I respect Pascal and consider him a friend, but business is business."