Canelo And Kovalev Speak About Showdown At MGM Arrival 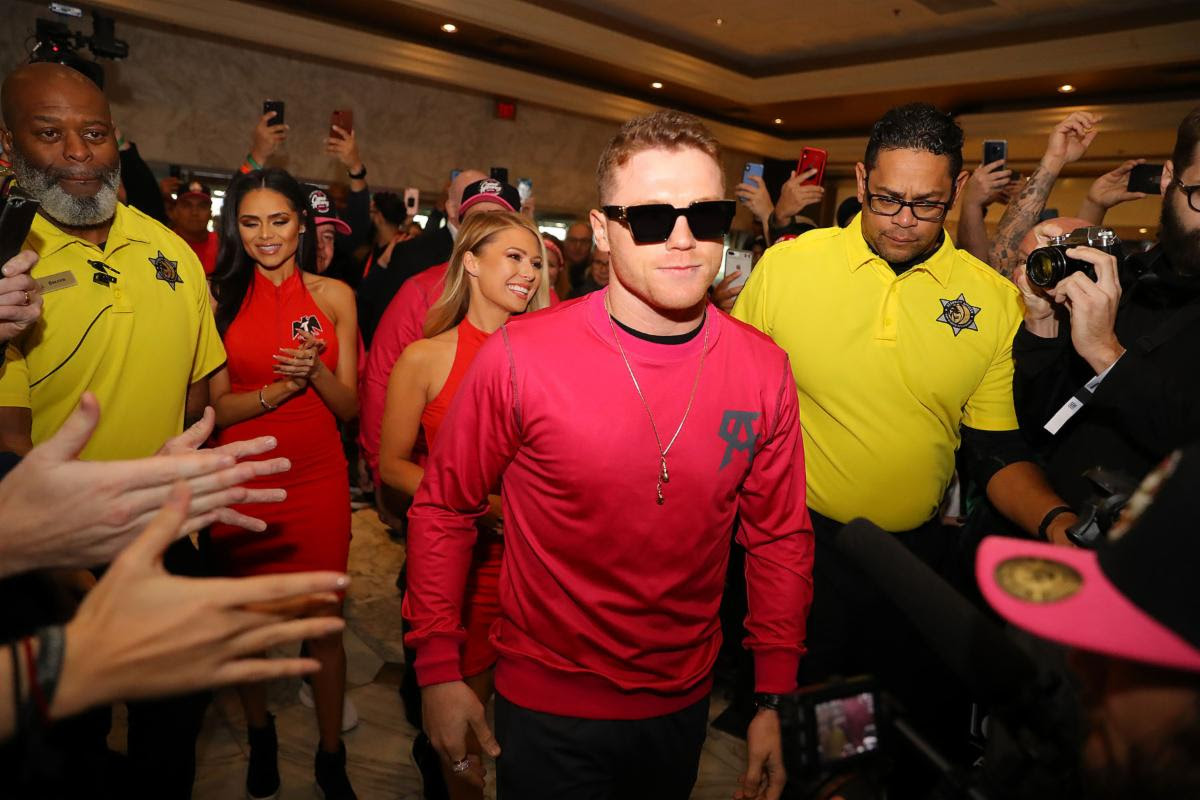 LAS VEGAS (Oct. 29, 2019): Canelo Alvarez (52-1-2, 35 KOs) and Sergey "Krusher" Kovalev (34-3-1, 29 KOs) made their grand arrivals today at the MGM Grand Resort and Casino in Las Vegas ahead of their 12-round fight for Kovalev's WBO Light Heavyweight World Title. The event will take place on Saturday, Nov 2, 2019 at MGM Grand Garden Arena in Las Vegas and will be streamed live exclusively on DAZN.

Below is what the fighters had to say at today's grand arrivals:

"As always, I'm very grateful that everybody is here, I'm very honored and I'm ready. This is very important for myself, for my career, for my history, for my family, for my team. To be a world champion in four different weight classes would be another chapter of my story."

"Everything has been different, the weight, the training, and I can't wait to see how it goes on Nov 2. I'll do my best."

Does the fan support ever get old? "No, it's very motivating. This motivates me and I'm ready for triumph."

"I feel great. I'm here for my glory. For my story. For my history. A couple fights ago, when I started to work with my new team Buddy McGirt and Teddy Cruz, they gave me back my belief in myself. With this team I can do more. You can see, with my last fights, a little bit of change to my technique and style. I'm ready to fight 12 rounds."

"It's not the goal to knock someone out, I just need to follow my instructions from the corner, from my coach, and everything will be fine."

Is Canelo going from 160 to 175 a mistake? "You know, I respect his steps and his risks. This is boxing, but in boxing, only real men try to prove themselves, that they're a real fighter, and Canelo is that. But this is my division, I have been in this division since my first fight, and I want to make my history, my story. He's just trying. Right now, 175 has a lot of good fights right now, a lot of good fighters right now, even Canelo has come to 175."

On all the boos from Canelofans: "I want to disappoint a lot of people on Saturday. In England, everybody was going against me, but after the fight, everyone was asking for my autograph. Your boo is good!"

On his Fierce King jacket: "It's just my new brand, so I wanted to rock it. I created the design and I just like the name, Fierce King. My nickname's King and I'm fierce in the ring."

On his social media presence: "It's just an easy thing to talk about. I don't really talk about it. I just focus on what I'm doing in the ring. Everyone else talks a lot, they like to mention my social media, but it's an easy way to connect with my fans. With the click of a button, that's 3.6 million fans, and I can update them and show them what I'm doing in the gym and with my training."

"I'm here now, it don't matter what he was thinking. I'm here now, I'm ready to do my thing Saturday night and prove that I'm the better fighter. Words are cheap, I'm just ready to show what I can do."

On what a win Saturday would say to his naysayers: "I don't know what it says to them, that's up to their own judgment. I believe in myself and my team believes in me and that's all that matters. This is a big moment and a big time in my life, so thank you all for your support."

"I'm feeling excited. This is a big card. A lot of people said that King Ryan is going to beat you, but I said to myself that maybe I can have a technique to counter that kind of speed."

Was he upset that Ryan Garcia didn't accept his offer to fight in Carson last month after Avery Sparrow was taken off the card? "No, I respect the decision because I know that King Ryan had already prepared for a different opponent, and that's why he didn't accept the offer."

"It feels so good. I'm so thankful to Golden Boy Promotions and to Oscar for putting me on this big card."

"I'm feeling great, I had an amazing training camp and I'm just going to let all the work show in the ring Saturday night."

"It's very personal, even after I win I still won't like her. There's been a lot of talk from her for the past two years. I do my talking in the ring. Saturday night, we're going to show who's really the best."

On Esparza saying she's been ducking her: "That's a lie, I've been wanting to fight her. I accepted this fight before she did and I was ready to go. I don't fear anybody and Marlen Esparza will be the least one that I fear. I'm just ready to put on an exciting fight for women's boxing and for the sport on Saturday night."

Why is this fight finally happening now? "I forced it. I forced it for a long time, after I came back I really felt like I needed to go ahead and ask for it because I knew it was going to take a while. It was something that I was promised a long time ago but I'm back and I really want to fight."

"It was really good, it was probably one of the best training camps of my life. I'm in a really good place mentally and when you get to this level of boxing, that's what's the most important. After so many years, you know how to box, it's really the mentality and I feel like I've never been in a better place."

"I don't like her because she used my name to try to get signed before I turned pro. Before I turned pro, she said I used to run from her in the amateurs. And when I turned pro, a lot of the promoters were asking me if that was the truth. Anyone would get mad getting their name used, and completely not the truth too."

"It's such a big fight for women's boxing. I feel like this will be a reintroduction into the boxing world and I feel like I'm in the best place to do it, and to represent women's boxing with another girl who is Mexican-American. I couldn't be in a better situation."

"I just don't like her. She'll hate me even more after this. It is what it is."

"It means it's the opportunity for me to take over. Take over the show, the whole world. Millions around the world are going to see the baddest, the most exciting man in boxing today - Blair 'The Flair' Cobbs."

Canelo vs. Kovalev is a 12-round fight for the WBO Light Heavyweight World Title

presented by Golden Boy, Main Events and Krusher Promotions. The event is sponsored by Tecate, "THE OFFICIAL BEER OF BOXING," Hennessy "Never Stop. Never Settle" and Brand-New Grapefruit Crush, Knockout Flavor. The event will take place Saturday, Nov. 2 at the MGM Grand Garden Arena in Las Vegas and will be streamed live exclusively on DAZN. The title clash is one of several highlights this fight season on DAZN - an entire fall featuring boxing's biggest matchups in one of the best schedules in boxing history.