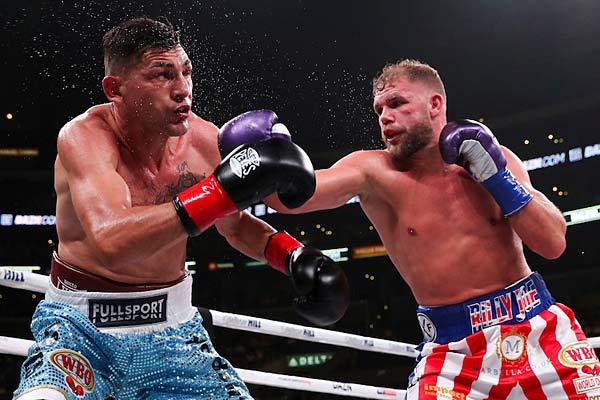 Billy Joe Saunders retained his WBO super middleweight title by knocking out a game Marcelo Esteban Coceres in the 11th round on Saturday at Staples Center in Los Angeles, California on the undercard of the KSI-Logan Paul rematch.

Saunders (28-0, 14 KO's), a southpaw, spent much of the fight on his bicycle, which forced Coceres (28-1-1, 15 KO's) to press the action. However, he found Saunders to be an elusive target. The fans, mostly kids who were there to watch the "YouTube sensations," did not appear to enjoy the bout much, and had begun to howl by the 10th round.

In the 11th round, Saunders shifted into gear and scored three knockdowns. Coceres was sent to the floor for a second time from a massive uppercut. After going down a third time, referee Ray Corona waved off the fight with just under two minutes left in the round.

"There's no excuses. The performance [was] not worthy [of] Canelo [Alvarez] or [Daniel] Jacobs," Saunders said. "I knew in my head I had to get him out of here. My timing was off, my movement was off, everything was off. I wanted to impress the crowd. Hopefully you enjoyed the KO, all I could do tonight."

Saunders called out Canelo Alvarez, who knocked out Sergey Kovalev last week to win a world title in a fourth weight class, to throw it down.

"Canelo if you want to become four-weight champion, take me now because this is the time to make it happen," Saunders said. "I want Canelo. I respect you, you've done big things for the sport."