Navarrete to make fourth title defense against Horta on December 7 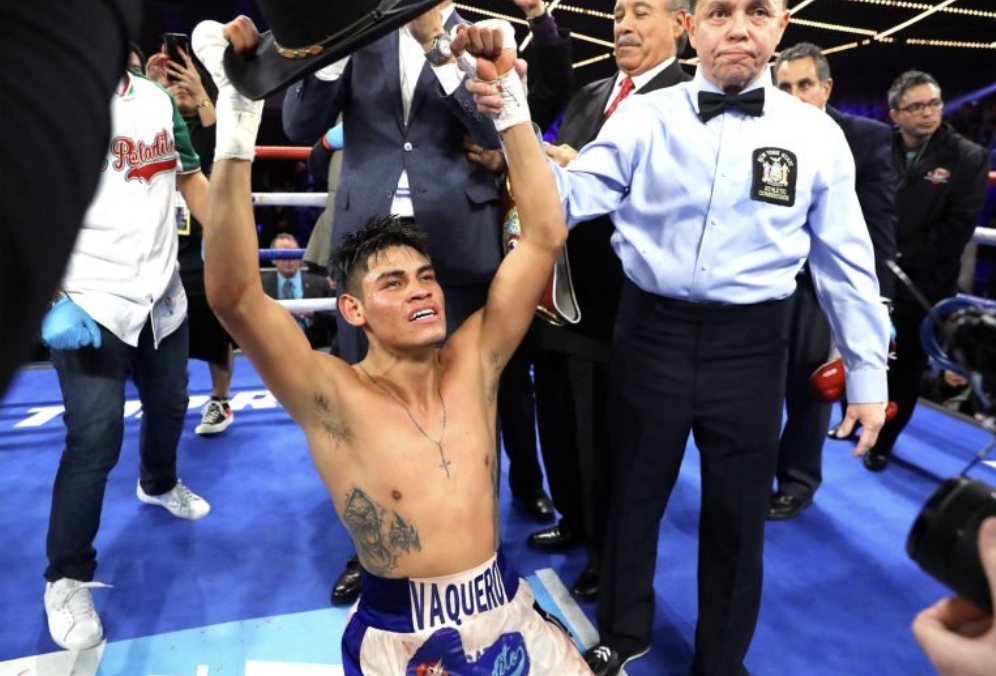 Junior featherweight world titleholder Emanuel Navarrete will fight for the fourth time this year in his fourth title defense when he faces Mexican countryman Francisco Horta.

The bout will take place on Dec. 7 (ESPN+, 10 p.m. ET) at the Auditorio GNP Seguros in Puebla, Mexico, in the main event of a Top Rank Boxing card.

Junior bantamweight world titlist Jerwin Ancajas will also be on the main card as he is set to defend his title against Miguel Gonzalez. Featherweights Miguel Marriaga and Alfredo Mejia Vargas, will also fight.

"Emanuel Navarrete is one of Mexico's great young champions, and he's only getting started," Top Rank chairman Bob Arum said. "At 24 years of age, he is wise beyond his years and hungry to challenge himself against the very best. He'll have defended his belt four times in 2019, and 2020 is shaping up to be another spectacular year for 'Vaquero.'"

Navarrete (29-1, 25 KO’s) won the 122-pound world title by unanimous decision over Isaac Dogboe last December in New York and has since made three successful defenses. He scored a 12th-round knockout of Dogboe in May, a third-round knockout of Francisco De Vaca on Aug. 17 and a fourth-round stoppage of Juan Miguel Elorde on Sept. 14.

Navarrete will return to his home country to fight for the first time as a champion. He has not fought in Mexico since June 2018.

"I am very excited to close the year by defending my world title in my beloved Mexico," Navarrete said. "This will be another dream that will be fulfilled and I assure you another exciting fight. I always go for the knockout. I think it is best to win by knockout, and on Dec. 7, the fans in Puebla will see another action-packed fight from 'El Vaquero.'"

The little-known Horta (20-3-1, 10 KO’s), 26, has not suffered a loss since 2014, but has faced weak opposition, winning his last 10 fights. However, he struggled in his most recent bout against 8-4-2 Francisco Alarcon in August, escaping with an eight-round majority decision. Now, he is stepping up to face the elite Navarrete.

"On Dec. 7, the fans will get to know who I am. This will be guaranteed war because we are both Mexican warriors," Horta said. "This is a golden opportunity; definitely a dream that will come true sooner than expected. I will dispute the world title against the best 122-pounder in the world, Emanuel Navarrete. I will win the title at any cost."

Ancajas was slated to defend his 115-pound world title against Jonathan Rodriguez on the Miguel Berchelt-Jason Sosa card on Nov. 2 in Carson, California, but the bout was nixed at the last second because Rodriguez was unable to secure a visa to enter the United States.

"I am ready to defend my world title in front of the great Mexican fans," Ancajas said. "Since my fight against Rodriguez was canceled, I've stayed in America to train, and I am in fantastic shape. Gonzalez is a worthy challenger and has beaten good opposition to earn this title shot."

Gonzalez will fight for a world title for the first time in his professional career. He has fought and defended secondary titles in the past.

Gonzalez suffered an eighth-round knockout to unbeaten Andrew Moloney in March 22 in a WBA super flyweight world title eliminator. Gonzalez has won two fights in a row by knockout against journeymen since.

"This is the opportunity I've been waiting for," Gonzalez said. "Ancajas is a great champion, but this is my time."