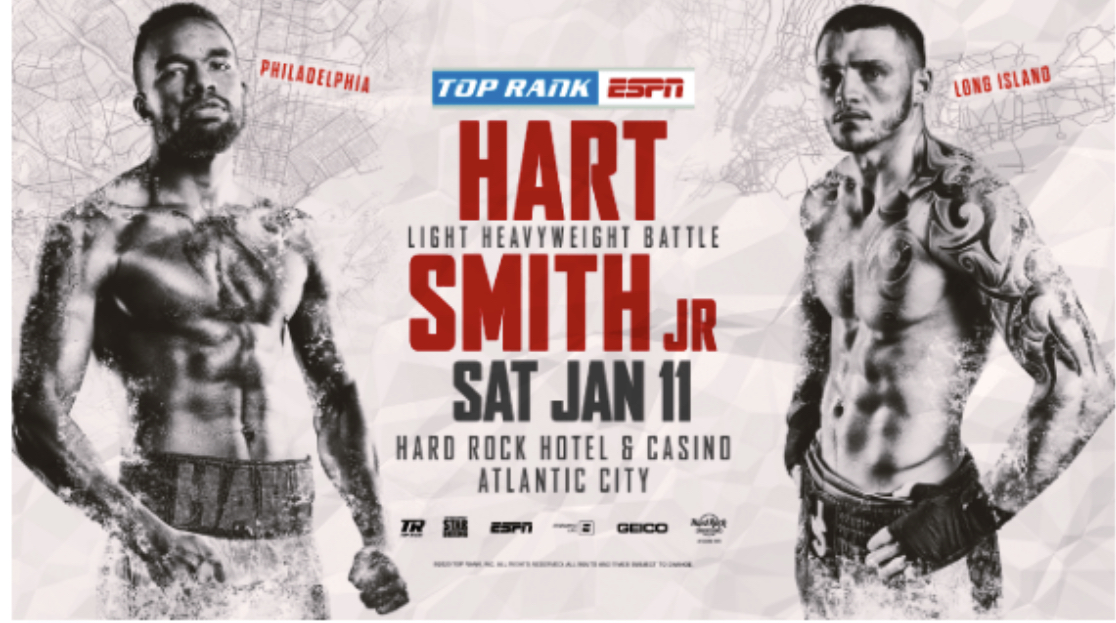 Light heavyweights Jesse Hart and Joe Smith Jr. will fight on Jan. 11 in the main event of the first Top Rank Boxing on ESPN card of 2020.

Hart and Smith will meet in a 10-round bout at Etess Arena at Hard Rock Hotel & Casino in Atlantic City, New Jersey (ESPN and ESPN Deportes, 10 p.m. ET with preliminary bouts streaming on ESPN+ beginning at 7 p.m. ET).

"When you have two fighters who can punch like heck, anything can happen," Top Rank chairman Bob Arum said. "We believe Jesse Hart has everything it takes to become a world champion, but Joe Smith Jr. can turn the lights out at any moment."

Smith (24-3, 20 KO’s), 30, a union construction worker from New York's Long Island, made a big splash in 2016, with back-to-back knockout victories, a first-round stoppage of former contender Andrzej Fonfara, followed by an eighth-round knockout of future Hall of Famer Bernard Hopkins, whom Smith knocked out of the ring and into retirement.

Smith hasn’t fought much since. He dropped a unanimous decision to Sullivan Barrera in July 2017, then scored a first-round knockout of journeyman Melvin Russell, before getting outpointed by 175-pound titlist Dmitry Bicol in a lopsided contest in March.

"I am focused and ready to bring everything I have," Smith said. "Jesse Hart might want to make this personal, but I didn't even know who he was before this fight was brought up. I am ready for this. It is going to be a great night."

"This is personal. Bernard inspired me to be what I became," said Hart. "I wouldn't be right if I didn't avenge that defeat. I can't move forward unless I beat him. This is a Philly thing. It's more personal than business for me. I want a world title shot at light heavyweight, but I have to get through this guy first."

Hart, the son of former 1970s middleweight contender Eugene "Cyclone" Hart, suffered both of his losses in super middleweight world title bouts against Gilberto "Zurdo" Ramirez, the first in September 2017 and then in a December 2018 rematch.

After the second defeat, in which Hart was thoroughly outclassed, he moved up to 175-pounds. In his light heavyweight debut, Hart outpointed Barrera in June on the undercard to Tyson Fury-Tom Schwarz at MGM Grand in Las Vegas.