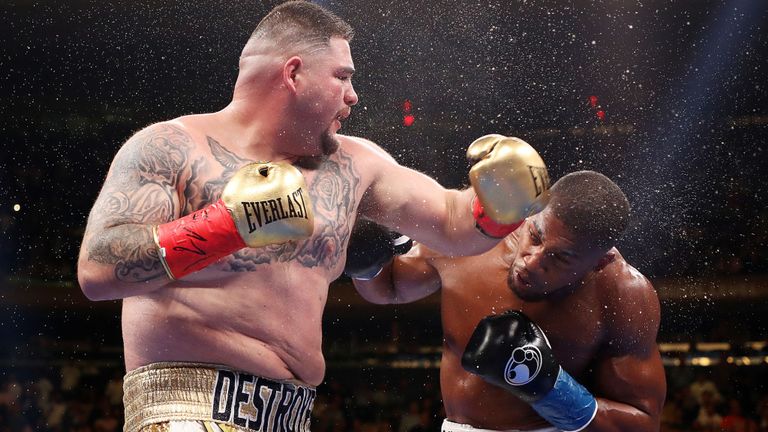 Madison Square Garden was supposed to be the scene of Anthony Joshua's victorious coming out party in front of an American audience this past June. But the storyline didn't play out as widely expected.

The Watford-born fighter was on a run of 22 straight wins in his professional career before facing off with late replacement opponent Andy Ruiz Jr. He was scheduled to take on Jarrell 'Big Baby' Miller before the American challenger failed a drugs test for no less than three banned substances.

Instead, Ruiz Jr stepped up on short notice for what would prove to be a life-altering ring outing in New York City.

Joshua looked to be on his way to an expected triumph when he dropped his stand-in foe in the third round of his debut on American soil. But the tough, game Mexican-American got back to his feet and immediately sent 'AJ' crashing to the canvas as well.

From there on it was all downhill for Joshua, as he was decked further before the match was eventually stopped in the seventh round at the 'Mecca of Boxing' in the Big Apple.

All eyes are now focused on the rematch, which has been penciled in for December 7th at the Diriyah Arena in Saudi Arabia, where 'AJ' will aim to bounce back and get his career back on course.

Champion-turned-challenger Joshua is set to take to the ring as the 2/5 favorite to gain his revenge in the latest fight night, despite having been completely dismantled and beaten badly the first time around.

In spite of having become a unified heavyweight champion this past June, Ruiz Jr is regarded as the 9/4 outsider to retain those titles with a second successive victory over 'AJ' in Saudi Arabia.

Such a result would likely spell the end of Joshua's career at the highest level of the sport, considering Deontay Wilder is enjoying his prime years as WBC heavyweight champion and Tyson Fury is busy building his reputation across the pond.

If that comes to fruition and 'AJ' is left picking up the pieces of a second consecutive defeat at the hands of Ruiz Jr, all of those previously mooted showdowns with Wilder and Fury would be scuppered. While Joshua has already picked up plenty of prize money to enjoy a prosperous life, he would not only miss out on those further paydays, but more notably the opportunity to boost his career legacy.

The unified WBA 'Super', IBF, WBO, and IBO heavyweight titlist would not only derail Joshua's career with a high-profile rematch success but bolster his own career massively.

An undisputed bout with Wilder could be made if he can secure another huge victory on his travels in December, with all of the major belts being on the line. That is, of course, if Wilder can get past Cuban challenger Luis Ortiz.

Joshua's loss in June is likely to be named the Upset of the Year once such awards start being handed out, but the dethroned former champion will look to avoid ending 2019 as a forgotten figure in the division and instead begin 2020 as the main man.