Frampton fractured both hands in win over McCreary 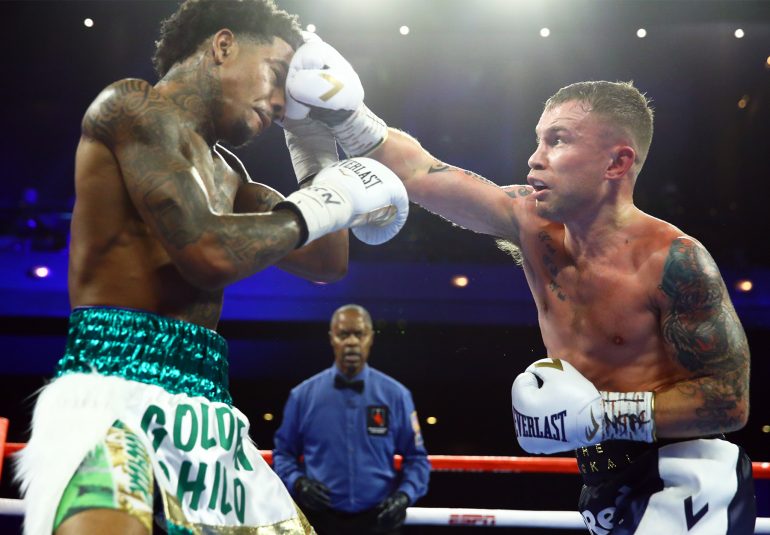 Former two-division world titleholder Carl Frampton suffered fractures in both hands in his 10-round unanimous decision victory against Tyler McCreary.

Frampton dropped McCreary twice in their 130-pound bout on Saturday evening on the Top Rank Boxing on ESPN+ card at The Cosmopolitan of Las Vegas.

Following the fight, Frampton, of Belfast, Northern Ireland, said that he believed he had re-injured the same left hand that he broke in a freak accident in August when a concrete pillar fell on it inside the fight hotel's lobby, which forced him to withdraw from a fight against Emmanuel Dominguez

After a visit with a hand specialist on Wednesday, it was determined that Frampton, who has won world titles at 122, 126, and 130-pounds, suffered an acute fracture of the fifth metacarpal in his left hand, and a fracture at the base of his third metacarpal in his right hand.

Once Frampton recovers, he is expected to face junior lightweight world titlist Jamel Herring in the spring in Belfast

Herring (21-2, 10 KO's), 34, of Coram, New York, won a 130-pound belt by unanimous decision against Masayuki Ito in May and then outpointed mandatory challenger Lamont Roach on Nov. 9 in his first defense.