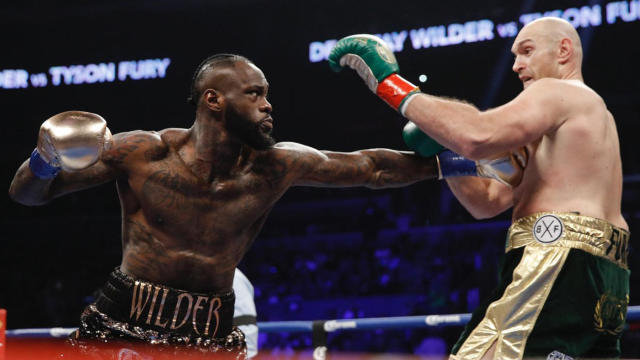 The fight, as expected, will take place at MGM Grand Garden Arena in Las Vegas and will headline a joint pay-per-view between Premier Boxing Champions and ESPN.

Tickets for the fight will go on sale on Saturday.

"I'm happy and I'm excited that the rematch is finally happening," said Wilder. "I want to give the fans what they want to see. I've been doing it with my last three outings -- Fury, [Dominic] Breazeale and Ortiz. They've been spectacular events -- from my ring walks, where I gather all the energy of the people, to my uniforms that I wear to help spread that energy. Then I give them what they all come for -- the knockouts, and my knockouts have been amazing.

"I proved myself the first time and I'm ready to do it again. It was a very controversial fight. I promise my fans that there won't be any controversy with this one. I'm going to finish it."

Wilder (42-0-1, 41 KO's), 34, of Tuscaloosa, Alabama, and Fury (29-0-1, 20 KO's), 31, of England, fought to a controversial draw in their first outing last December at Staples Center in Los Angeles, a memorable bout that a majority of ringside observers saw Fury winning.

Fury outboxed Wilder for a majority of the fight, but Wilder scored two knockdowns -- one in the ninth round, and a monstrous one in the 12th, which saw Fury barely beat the count. One judge had Wilder winning 115-111, one gave Fury the edge 114-112 and, the third judge scored it 113-113.

Fury will enter the ring with a new trainer. He parted ways with trainer Ben Davison earlier this month to join forces with Javan "Sugar" Hill, the nephew of the late International Hall of Fame trainer Emanuel Steward. The decision was a shocking one, considering that Davison had trained Fury throughout his comeback into the sport following battles with depression, alcohol, and drug abuse.

But Fury is confident that he will have the upper hand on Wilder come fight night.

"There's no more ducking and diving," Fury said. "The date has been set, and the 'Bomb Squad' is about to be securely detonated and the real champion crowned as the world watches on for the most anticipated fight in years. This is unfinished business for me, but come Feb. 22, this dosser will finally get what's coming to him, and I can't wait."

Wilder and Fury had a deal in place for the rematch this past spring. However, Fury, at the last second, signed with Top Rank, which has an exclusive long-term deal with ESPN.

Wilder and Fury eventually agreed to the rematch, which also includes a trilogy fight. But the deal also called for both fighters to first have two interim bouts.

Fury destroyed Tom Schwarz in the second round on June 15 at MGM Grand and then scored a brutal unanimous decision win over Otto Wallin on Sept. 14 at T-Mobile Arena in Las Vegas, where Fury suffered two gruesome cuts over his right eye. The cuts required a total of 47 stitches to close the wound.

Wilder knocked out both of his opponents. He put the icing on the cake with a first-round knockout of mandatory challenger Breazeale on May 18 at Barclays Center in Brooklyn, New York, and then knocked out Ortiz in the seventh round last month.