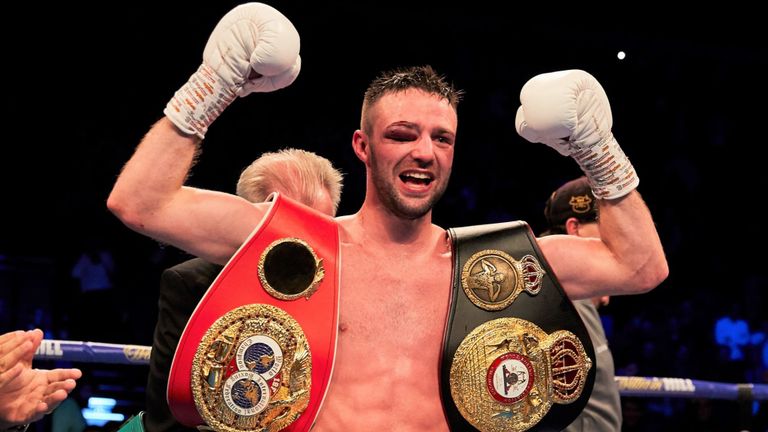 Terms of the deal were not disclosed, but it is yet another significant signing for Top Rank, which also recently inked unified 118-pound world titlist Naoya Inoue, who won the WBSS tournament in that weight division.

"A new year, a new decade with lots of new beginnings, and I'm starting this new decade with a big bang," Taylor said. "2019 was a huge year for me, but 2020 looks set to be even bigger and I'm delighted to have signed a deal with Top Rank and ESPN and an advisory contract with MTK Global. I believe I am with the best team to take my career to the next level. I couldn't ask for a better partnership, and I know the future looks bright with this team lighting the way."

Taylor joining Top Rank not only represents a terrific signing for the company, but it is also a win-win for boxing fans.

It paves the way for Taylor (16-0, 12 KO's) , a southpaw who represented Scotland in the 2012 Olympics, to face face fellow unbeaten two-belt titleholder Jose Ramirez, who is also with Top Rank, for the undisputed junior welterweight world championship.

However, Ramirez (25-0, 17 KO's), 27, of Avenal, California, who unified two belts in July with a sixth-round knockout of Maurice Hooker, must first get past mandatory challenger Viktor Postol, a former 140-pound world titlist, on Feb. 1 at Mission Hills Haikou in Haikou, China.

The last undisputed champion at 140-pounds was current welterweight titlist Terence Crawford, who got the job done in 2017 with a third-round knockout of Julius Indongo.

"Both guys want it desperately," Top Rank vice president Carl Moretti said. "The obvious fight for Josh is a Jose Ramirez unification fight and maybe eventually a move up to 147. But whatever fights he has, Josh is another example of a guy who wants to fight the best. Jose Ramirez is the same way. A lot of our guys are like that -- Shakur Stevenson wants to fight Josh Warrington, Teofimo Lopez wants to fight Loma [Vasiliy Lomachenko], who also wants to fight him.

"We have enough fighters at Top Rank, but what we want are men who want to go out there and prove they're the best in their respective divisions and we have that with guys like Josh Taylor, Jose Ramirez, Inoue, [Emanuel] Navarrete, Shakur, [Miguel] Berchelt, Loma, Teofimo, Terence Crawford, [Artur] Beterbiev and Tyson Fury."

Top Rank chairman Bob Arum is excited for Taylor's future with the company.

"Josh Taylor is one of the world's best fighters, and he is a fight fan's fighter, a tough guy willing to fight anyone we put in front of him," Top Rank chairman Bob Arum said. "Whether it's Jose Ramirez in a fight for the undisputed junior welterweight title or any of the welterweights out there, he's ready for the biggest challenges. I want to thank Josh's advisors at MTK Global, who have the same goal as us, which is to make him an international star."

However, Cyclone Promotions, a promotional company based in the United Kingdom, is not so excited about the news. In fact, they are quite upset. They claim that Taylor is still under contract with them.

"We are very disappointed to read the news that Josh Taylor has signed a promotional agreement with another promotional company. Josh Taylor is under an exclusive worldwide promotional contract with Cyclone Promotions," the company said in a statement. "We have successfully brought Josh to the pinnacle of the sport from the day that he turned professional, including working alongside other stakeholders in boxing to deliver him to the biggest fights.

"More recently, Josh became IBF world champion in May 2019 then unified champion in October 2019, and we have been working since then to plan the next stage of his career. We are saddened that Josh has felt the need to attempt to break his contract in this manner and frustrated at those who have caused him to do so."

Although "The Tartan Tornado" did not turn pro until 2015, he has made a big splash in such a short amount of time. In 2018, he dropped and easily outpointed former world champion Viktor Postol. When Taylor entered the World Boxing Series, that was when the boxing world really became aware of his skills.

He destroyed Ryan Martin in a seventh-round knockout victory in a one-sided fight in the quarterfinals. Then he knocked down Ivan Baranchyk en-route to a unanimous decision to won his first world title in the semifinals last May, and defeated Regis Prograis in the October final by majority decision in an action-packed battle.