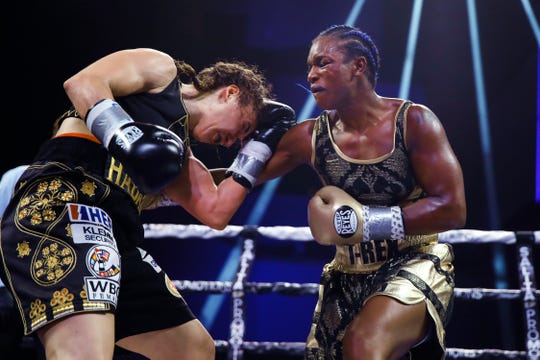 Shields, who has already unified two belts at super middleweight and then became the undisputed middleweight champion, dominated and dropped Ivana Habazin en route to a lopsided unanimous decision to win a pair of vacant junior middleweight world title belts in the main event of a Showtime tripleheader.

Shields, who still holds the undisputed middleweight title, became the fastest boxer to win a world title in three weight classes. The two-time Olympic gold medalist got the job done in just 10 bouts. Unified lightweight world titleholder Vasiliy Lomachenko won a title in his third division in his 12th fight in May 2018, and flyweight belt holder Kosei Tanaka also accomplished the feat in September 2018.

"This feels great -- I did it in 10 fights," Shields said. "Now I'm No. 1, the fastest boxer in history to become a three-division world champion."

The bout was twice delayed, but for two very different incidents. The fight was supposed to take place in Shields’ hometown of Flint, Michigan, but was postponed when Shields dislocated her right knee in June.

The fight was rescheduled for Oct. 5, also in Flint, but at the weigh-in for the bout, Habazin's trainer, 68-year-old James Ali Bashir, was assaulted and seriously injured by Shields' brother, 28-year-old Artis Mack, who at the time was on parole for assault and weapons violations. Mack is awaiting trial on one count of assault with intent to do great bodily harm less than murder.

Bashir, still recovering from his injuries, was replaced by former welterweight fighter Steve Upsher Chambers, but Bashir was at the fight to wrap Habazin's hands.

Although the drama made for some interesting story lines, the fight itself did not have any, as Shields (10-0, 2 KO's), 24, dominated from the outset.

Shields got off to a strong start and backed Habazin up with jabs in the opening frame. She controlled the second round as well, but Habazin (20-4, 7 KO's), a 30, an ex-147-pound titlist from Croatia, shoved her into the ropes at the bell.

The gesture did not deter Shields, as she continued to box beautifully, connecting with several right hands to Habazin's head in the fourth round.

A left hook to the body knocked Habazin to the canvas, the first knockdown of Shields' career.

Shields cruised to the unanimous decision victory and was never seriously threatened.

With Habazin disposed, Shields has set some new goals for herself to accomplish, ones that she will likely meet.

"I just want to become a better fighter. That's all. I want to grow women's boxing," Shields said. "I want to share a card with Deontay Wilder and Errol Spence. Andre Ward (who was ringside) said, 'Sis, take her to the body.' I was throwing all body shots in the first minute and then boom, she went down."

"I'd love to face Elin Cederroos. I'd love to fight her," said Shields. "None of these girls are ready for me."