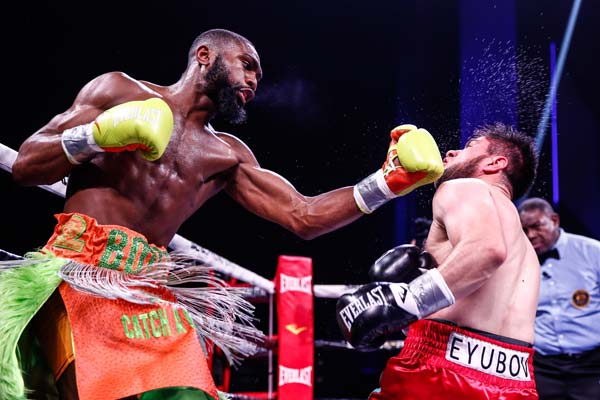 ATLANTIC CITY, N.J. -- Fast-rising welterweight prospect Jaron "Boots" Ennis, who has often been compared to Roy Jones Jr. for his unique combinations, of speed, power, and combinations, picked up his 15th consecutive knockout victory in a brutal, one-sided destruction of Bakhtiyar Eyubov.

Ennis (25-0, 23 KO's), 22, of Philadelphia, battered Eyubov to the body with both hands from the outset and dropped him with a combination upstairs at the midway point of the round. Ennis dropped him to his knees just moments later with a barrage of punches. Eyubov somehow made it out of the round, which was bad news for him, but great news for Ennis.

Eyubov (14-2-1, 12 KO's), 33, of Kazakhstan, got clobbered by an uppercut at the end of the third round and his corner nearly stopped the fight.

Ennis continued to dominate in the fourth round, but referee Earl Brown stepped in at 34 seconds to halt the action.

"We knew he was coming to fight and bring pressure, so we mixed it up," said Ennis. "He was a good fighter, but he wasn't really that strong. I was getting hit a little too much, but that's how we did it to get the knockout. We were just setting him up for power shots. I just had to calm down, that's all. I was too hyped. Once I calmed down and got into my rhythm, that was it.

"He was taking a lot of punishment. I appreciate him taking the fight because a lot of guys don't want to fight me."