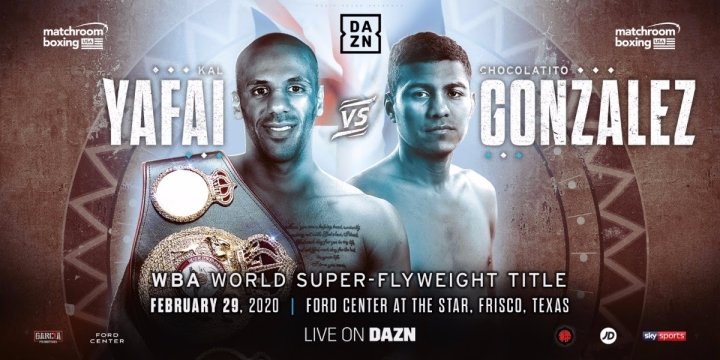 The fight will serve as the chief support for the Mikey Garcia-Jessie Vargas welterweight fight.

Yafai (26-0, 15 KO's), 30, of the United Kingdom, who was called out by Gonzalez in November 2017 for a shot at his title, is thrilled at the opportunity to fight the former pound-for-pound king and future Hall of Famer.

"I wanted the biggest possible fight available and after the Juan Francisco Estrada unification fell through, I had the opportunity to fight 'Chocolatito,' the former pound for pound king," Yafai said. "Chocolatito is someone that I have idolized as I worked my way up to become world champion myself, so it doesn't get much bigger than this and it will bring out the best in me. I can't wait, it is a case of when idols become rivals and I am so honored to share the ring with him but also show the world that I am an elite world champion." God has responded to my prayers once again. I want to thank God and (promoter) Teiken foremost. Also, the champion, Kal Yafai for giving me the opportunity to fight for the championship once again," Gonzalez said. "I know this will be a very hard fight, but it will be worthy of all our efforts and determination."

We've all heard the saying, "Everything's bigger in Texas," and Hearn is expecting that to play out in the ring.

"This is a brilliant fight on an absolute monster of a show. Kal Yafai has been waiting for an opportunity like this for a long time, and now he gets it against a legend of the sport in 'Chocolatito.' This card in Texas is going to be epic and you can expect Yafai versus 'Chocolatito' to be an all-out war."

Yafai was initially going to face fellow super flyweight titlist Juan Francisco Estrada in a unification fight, but the bout was postponed due to a hand injury suffered by Estrada.

That allowed Gonzalez (48-2, 40 KOs), 32, of Nicaragua, who has won world titles at strawweight, junior flyweight, flyweight and junior bantamweight, to jump into prime position to land the fight with Yafai.

Gonzalez scored a second-round knockout of Diomel Diocos on Dec. 23, his first bout in 15 months following a knee injury that required surgery.