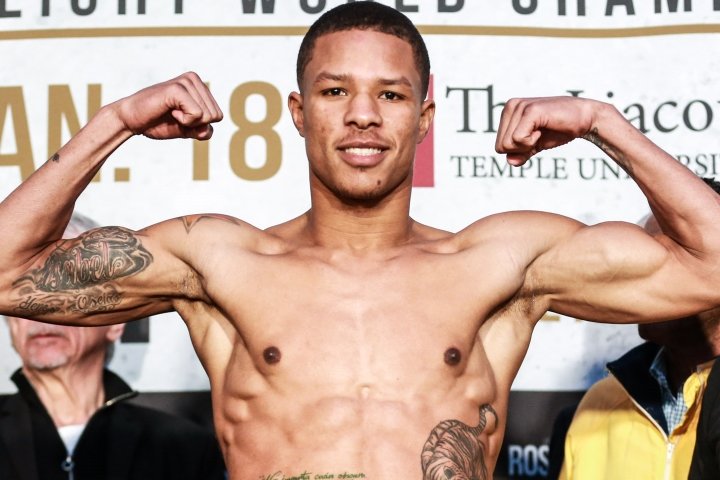 PHILADELPHIA Pa. -- All along, Julian "J Rock" Williams said it made no difference that he was making his first world title defense in his hometown, telling the media, "I'm just coming my job and coming there to win."

But Jeison "Banana" Rosario had other plans.

No one gave him a chance. The only people who did were himself and his team. For Rosario, who was crying tears of jubilation, that is all he needed.

Rosario, in the fifth round, caught Williams with a right uppercut that badly hurt him against the ropes. Then in an exchange of blows, Rosario connected with a clean left hook that sent Williams onto goofy avenue. Referee Benjy Esteves Jr. took a long look at Williams' eyes and stopped the bout, making Rosario the new unified junior middleweight champion of the world.

"I’m so emotional in this moment right now. When I lost my last fight (against Nathaniel Gallimore) I said I will never lose again until I become champion of the world and that’s what happened tonight," Rosario said.

That makes it two consecutive bouts in which the reigning unified 154-pound beltholder suffered upset losses in their defense in front of their hometown fans.

Rosario (20-1-1, 14 KO's), 24, of the Dominican Republic, entered the ring to a chorus of boos from the pro-J-Rock crowd. Rosario said at the weigh-in that Philly felt like "his house." The poor reception was not a problem for Rosario; it was expected, but as a fighter, he had to shield the negative energy and focus on throwing bombs, which is exactly what he did.

"I would have started doing training camps a little earlier if I had known these were going to be the results. Thanks to Philadelphia and to Julian Williams. Without this opportunity I wouldn’t be champion today."

Williams controlled the action in the first round behind an authoritative left jab. But things took a drastic turn in the following frame.

In the second round, Rosario surprised Williams with a barrage of punches, one of which was a clean left jab which opened up a cut above the eye of Williams. That bothered him for the rest of the fight, including swelling which had developed under both eyes.

"I wasn’t surprised he was so good. I told everybody he’s a real fighter," Williams said. "I have to accept it. The cut blurred my vision a little bit but it wasn’t the reason why I lost.

Rosario told FightNights.com that during training camp they focused exclusively on maintaining constant pressure on Williams -- it certainly paid off.

"I came prepared. I knew before the fight that I was going to win it."

Rosario took advantage of a wounded Williams for the next couple of rounds, before all hell broke loose in the fifth.

Williams got off to a good start in the fifth round by backing up Rosario with a jab, which got the Philly fans cheering. But those cheers quickly evaporated when Williams got clipped with a counter left hook in a close exchange.

Luckily for Williams (27-2-1, 16 KO's), 29, who also suffered a fifth-round stoppage in his previous loss to former junior middleweight titlist Jermall Charlo, there is a rematch clause.

"It was a great homecoming for my fans and I'm sorry I let them down. What went wrong tonight needs to and will be fixed. We're going to an immediate rematch and we look forward to returning the favor."

On the undercard, junior middleweight Paul Kroll, a 2016 Olympian, knocked down Marcel Rivers three times en-route to a fourth-round stoppage. Kroll dominated the opening round, but Rivers impressed in the second round, particularly with his defense. However, that did not hold up in the third.

Kroll drilled Rivers with an excellent one-two combination that sent him down flat on his back. Rivers (7-3, 4 KO's) made it out of the round, but his legs were still not underneath him. Kroll (7-0, 6 KO's), 24, of Philadelphia, continued his mean streak with a barrage of shots. A left hook to the body sent Rivers down to a knee and Kroll rattled him with a couple more punches while he was down, which earned him a warning from the referee.

In the fourth round, Kroll hurt Rivers again with a combination. At that point, the referee had seen enough and waved off the action. The time of the stoppage was :49.

Middleweight Kyrone Davis, who shares the same manager and trainer as Williams, scored a fourth-round stoppage over Antonio Todd.

Davis (15-2, 6 KO's), 25, of Wilmington, Delaware was in full control of the fight from the onset, using his jab and combinations to keep Todd, who did not land a single solid punch during the bout, at bay.

In the fourth round, it was evident from ringside that Todd was out of gas. In the previous round, Davis consistently whacked Todd (7-3, 4 KO's), 25, of Atlanta, with lefts and rights as his opponent stopped moving his head and was there to get hit. Williams, who was ringside cheering on his stablemate, urged Davis to go to the body, and he did just that.

Davis poured it on and punished Todd against the ropes, landing what appeared to be around 20-30 unanswered punches. Referee Gary Rosato appeared to have no interest in stopping the fight, although a majority of the crowd in attendance, including most of media row, were screaming at him to stop the fight. At 2:28 of the round, Rosato finally halted the bout.

In the preliminary bout to open the FS1 telecast, super bantamweight Romuel Cruz never broke a sweat, knocking down Julio Garcia twice en-route to a first-round stoppage. Cruz (4-0-1, 2 KO's), 26, a Puerto Rico native fighting out of Philadelphia, exclusively targeted the body of Garcia and never relented. The first knockdown, however, was the product of a short right uppercut. From that point on, Cruz connected with body shot after body shot. After the second knockdown, the referee stepped in to prevent Garcia (3-4, 2 KO's), 29, who was born in Mexico, but fights out of Madison, Wisconsin, from taking any more punishment. The time of the stoppage was 2:56.

Highly-regarded prospect Vito Mielnicki Jr., who is just 17 years of age, outpointed Preston Wilson over four rounds. All three judges scored the fight 40-36. FightNights.com had the same score. Mielnicki (4-0, 3 KO's), of Roseland, New Jersey, was in control of the bout from the onset behind his jab and straight right hand connects to the body. Wilson (6-3-1, 4 KO's), 27, of Parkersburg, West Virginia, never pressed Mielnicki and looked to survive the fight, which he did.

Junior middleweight Jorge Cota, whose three losses have come to world-class opponents in Jermell Charlo, Erickson Lubin, and Rosario, had an easy night of work, scoring a fifth-round stoppage of a game, but outmatched Thomas LaManna.

Cota dictated the pace from the opening bell, battering LaManna throughout the fight with a barrage of lefts and rights. At the end of the first round, LaManna was already reddened from head to toe. LaManna (28-3-1, 10 KO's), 28, of Millville, New Jersey, taunted and urged Cota to bring it on throughout the bout and he gladly obliged, drilling "Corn Flake" with nearly every shot he threw. That became the pattern for the rest of the fight. Cota (30-4, 27 KO's), 32, of Mexico, took the same steadfast approach to the fifth round and LaManna's corner, having seen enough of their fighter get picked apart, asked the ringside commission to stop the fight. The time of the stoppage was 1:22.

154-pound prospect Joey Spencer outpointed Erik Spring in a six-round contest. The fight was uneventful overall. Spencer (10-0, 7 KO's), 19, of Linden, Michigan, was never seriously threatened. He controlled the pace of the bout behind his jab and straight right hands to the body. Spencer badly hurt Spring (13-4-2, 1 KO), 35, of Reading, Pennsylvania, with a left hook late in the sixth round, but it was too late. Only a few seconds remained on the clock, which Spring survived. The fight drew boos from the crowd throughout, including some in media row.