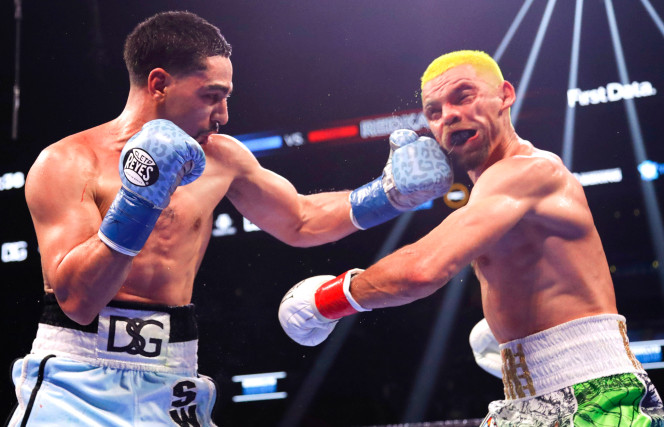 "I thought the referee was gonna stop it because I felt like I was punishing him," Garcia said. "He's a tough guy. He hung in there. I wanted to get the KO, but I didn't get it. I feel like I boxed smart, and I feel like that's what I needed after this [nine-month] layoff. I really wanted the knockout bad, but I'll accept this."

Garcia was initially slated to face Spence on Saturday night but the fight was called off before it was formally announced after Spence was injured in a one-car accident in October. Miraculously, the unbeaten Spence survived with a couple facial lacerations and is expected to return to the ring late this spring or in early summer. Pacquiao, on the other hand, could be back as early as March.

But first came the massive underdog Redkach (23-5-1, 18 KO's), 33, a Ukraine native based in Los Angeles, who proved nothing more than to be a fighter with a big heart.

After a lethargic start, Garcia began to connect to the body with hard combinations and left hooks.

Garcia (36-2, 21 KO's), 31, of Philadelphia, cranked up the heat in the fifth round, hurting Redkach with a right hand late in the round, continuing to cut off the ring, exhibiting little to no respect for Redkach's power.

In the seventh round Redkach sustained a nasty cut over his left eye, which bothered him for the rest of the fight.

The fight was temporarily stopped in the ninth round as referee Benjy Esteves called timeout to have the ringside doctor examine Redkach. The bout was allowed to go on and Garcia went right back to business. However, Redkach appeared to be hungry. Not to win, but to have a piece of Garcia -- literally.

Redkach bit Garcia on the left side of his neck while in a clinch.

"He bit me. He said 'Mike Tyson' when he bit me," Garcia said. "I said 'Ref, he bit me.' I thought I needed stitches or something. That's my first time ever getting bit in a fight. Things happen though. I've been in a street fight before, so I did it all."

According to Compubox, Garcia landed 195 of 568 punches (34 percent) and Redkach landed only 88 of 578 (15 percent). In the bite category, Redkach received top honors, connecting with 1 out of 1 bite attempts.

"This was very good experience for me," said Redkach. "He never had me hurt and I was able to learn a lot. I'm thankful to be in this position that my team put me in and I'm going to keep growing from here. I'm going to get back in the gym and get stronger and better."

Garcia was solid although he admitted that he had some trouble preparing for the bout, as he had to lose 25 pounds.

"I'm not gonna lie, I felt good, but I didn't feel my best," Garcia said. "I did lose a lot of weight for this fight so maybe that played a factor (in not getting a knockout) -- from a long layoff, and just losing so much weight.

"I promised myself that I'm going to stay in the gym now and stay in shape. I felt regular, but then when I got on the scale a few weeks ago, I was like whoa! So maybe that played a factor, maybe it didn't. I make no excuses. I didn't feel my best, but I felt good."

Now Garcia, who has won world titles at welterweight and junior welterweight, is aiming to land a bout with either Spence or Pacquiao.

"Either or," Garcia said of his preference. "Either of those fights I would like to have. My style looks great with both fighters."